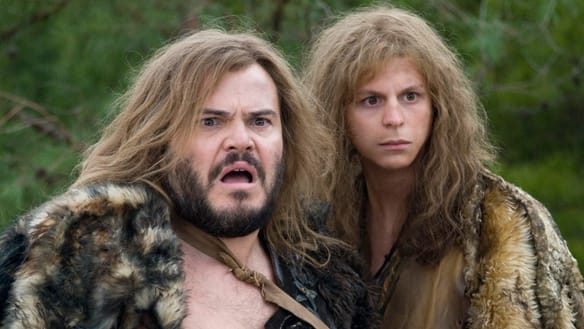 Harold Ramis has contributed, either as an actor, writer, director or producer, to some of the most popular comedies put out over the last 30 years. His credits include Animal House, Caddyshack, Ghostbusters, Groundhog Day, Analyze This & That plus many others. Even though the promos didn’t looking promising, with his impressive track record, I hoped Ramis’s new Stone Age comedy Year One, would surprise me and be funny. Well, the result was a giggle here and a smirk there, but Year One is one to forget.

Jack Black plays Zed, an inept hunter living during the Stone Age. Zed would like to “lay” with Maya (June Diane Raphael, Bride Wars), but even though he makes her laugh, she has her doubts that he would make a good mate.  Zed’s competition for Maya’s affection is the best hunter in the village, whose body looks like he just came from a photo shoot for a muscle magazine, Marlak (Matthew Willig, The Benchwarmers)

Zed’s best friend Oh (Michael Cera, Superbad), a gather, is having his own woman problems. He likes Eema (Juno Temple, The Other Boleyn Girl), but because of Oh’s bashful personality, she doesn’t notice him.

When Zed is upset about the lack of respect he gets in his village, he decides to eat a piece of forbidden fruit from the Tree of Knowledge in hopes that his new intelligence will help him figure out how to improve his image. When Zed’s despicable act is spotted by a fellow villager, Enmebaragesi (Horatio Sanz, Saturday Night Live), he is banished from the village forever.

Oh joins Zed on his journey and together they meet many of the Bibles most important figures including Cain (David Cross, Alvin and the Chipmunks), Abel (Paul Rudd, I Love You, Man), Adam (Ramis), Eve (Rhoda Griffis, We Are Marshall), Abraham (Hank Azaria, Night at the Museum: Battle of the Smithsonian) and Issac (Christopher Mintz-Plasse, Role Models).

After Zed hears about the types of immoral acts that take place in the sinful city of Sodom, he decides to go there to revel in this center of debauchery. While on his way to meet with Sodom’s beautiful Princess Inanna (Olivia Wilde, TV’s House M.D.), Zed discovers that Maya and Eema are being held there as slaves. Meanwhile, the High Priest of Sodom (Oliver Platt, Frost/Nixon) has taken an “unhealthy” interest in Oh. The boys agree to break Maya and Eema out, but first they must figure out how to escape from Sodom’s merciless king (Xander Berkeley, Taken) and the king’s top warrior, Sargon (Vinnie Jones, X-Men: The Last Stand).

While Harold Ramis has played a part in the creation of many funny movies, he and his writing team (Gene Stupnitsky and Lee Eisenberg, both of TV’s The Office) do not give the audience anything funny or new to watch. The same old jokes about poop, pee, farting and homosexuality are present like they are in many comedies these days. This “bathroom humor” is just gross, not funny. I was keeping my fingers crossed that Ramis would rise above this and write some truly funny material, but he didn’t.

Michael Cera is responsible for adding what little humor there is in this movie. Without him, Year One would be another top contender for Worst Movie of 2009. His delicate delivery of the movie’s only really funny one liners is what helps save this movie from being a total flop.

Jack Black is his usual self. Over-the-Top. Raunchy. Not funny. Can you name the last funny movie that Jack Black was responsible for? Me neither!

With this laugh-less comedy behind him, let’s hope Harold Ramis can find his talent for good comedy again when his next project comes out. Ghostbusters 3 due out in 2012.

A Deeper Look at “Maid in Manhattan”