The Code (AKA Thick as Thieves) 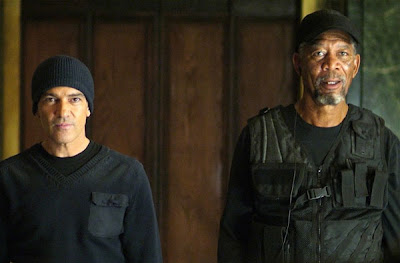 The Code is a straight-to-DVD heist movie starring two of Hollywood’s brightest stars, Morgan Freeman and Antonio Banderas. Director Mimi Leder (Pay It Forward) and  TV writer Ted Humphrey try to capture the slick spirit that has made the George Clooney Ocean’s movies so popular, but they fail to accomplish their goal.

Set in New York City, Keith Ripley (Freeman) is a mastermind thief. Lt. Weber (Robert Froster, Ghosts of Girlfriend’s Past), a veteran cop, has been trying to catch him for years. Weber thinks he finally maybe close to nabbing Ripley when he finds out what the thief’s next “job” is.

Ripley owes the Russian mob a boatload of money and they want it now or else. So, he devises a plan to steal two extremely rare Russian Faberge eggs valued at $20 million each. The problem is the two eggs are stored in a highly secured vault inside a museum with many armed guards, cameras and a high-tech motion detection laser system.

This is definitely a two-man job. With Ripley’s regular partner out of the picture, he goes looking for a new cohort. He finds Gabriel Martin (Banderas), a Miami-based thief who just happens to be in the Big Apple. When Gabriel agrees to help with the theft, Ripley warns him to stay away from his hot god-daughter Alexandra (Radha Mitchell, Phone Booth) or they’ll have problems. Do you really think “Gabby” will listen????

As far as heist movies go, Leder and Humphrey do not give us anything we haven’t seen in any other heist movie. After a target has been picked, we watch as the thieves develop and practice their in-depth plan to get in and out with their prize. The barriers to a thief’s success are always the same, lots of cameras and laser systems. When will banks and museums learn that cameras and laser systems don’t work???? How many times do we have to see the same old trick where a thief pipes in a video of an empty hallway, elevator or vault into the guards station while they rob the place blind???

Morgan Freeman is silky-smooth in his performance. He seems born to play a thief. Morgan is so believable that you could very easily just see him slipping in and out of someplace with a bag full of valuables. Great Job!

Antonio Banderas’s performance, on the other hand, is as smooth as sandpaper. He delivers his lines with such a raspy-voice that he is hard to understand at times. He seems more at home playing Alexandra’s “Latin Lover” than a crafty thief.

Radha Mitchell’s main contribution to the movie is a steamy love scene with Antonio, in which Gabriel “bares” more than Alexandra.

Near the end, Leder and Humphrey throw in some plot twist to try to breath some life into their otherwise colorless movie, but these revelations fail to shake things up like they were intended to do.

If you’re looking for a good heist movie, take a pass on The Code, and check out Spike Lee’s Inside Man (2006) or Sneakers (1992) starring Robert Redford for better quality and a more enjoyable viewing experience.

TRANSFORMERS 2 REVENGE OF THE FALLEN