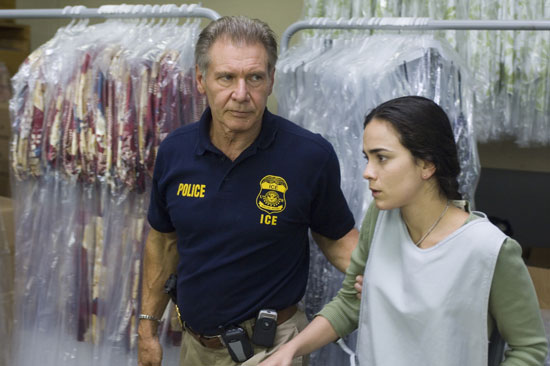 Harrison Ford plays Max Brogan, a police officer that often leads raids on factories that employ illegal immigrants. Max is compassionate towards the people he finds, showing concern for their well-being and offering his help if possible

Max’s partner, Hamid Baraheri (Cliff Curtis, Push), comes from a very traditional Middle Eastern family. His father is soon to be sworn in as an American citizen. What should be a normally happy time for the family is not because of Hamid’s sister, Zahra (Melody Khazae). Her wild and care-free attitude is looked upon with shame by her family.

Taslima Jahangir (Summer Bishil) causes her family a lot of trouble when she writes a paper for school that sympathizes with the 9/11 terrorists. After the FBI is notified and a quick investigation is conducted, it is determined that Taslima is a threat to American security. Taslima’s family is faced with a terrible decision: the whole family will be deported or one parent can go back with Taslima and one parent can stay with Taslima’s American-born brother and sister. Impossible choice!

Ashley Judd is is Denise Frankel, an immigration defense attorney who would like to adopt a child that has been stuck in a immigration detention center for 3 months. Denise’s slimy immigration officer husband Cole (Ray Liotta) is too preoccupied to think about this because he is too busy blackmailing Aussie Claire Shepard (Alice Eve). If Claire gives Cole sex any time he wants for the next 2 months, then he’ll give her a green card.

Claire’s boyfriend Gavin Kossef (Jim Sturgess, 21) is using shady methods of his own in pursuit of his green card. He is exploiting his Jewish heritage in hopes on staying in America.

Yong Kim (Justin Chon, Twilight) feels that he doesn’t fit into American society. He and his family are to be sworn in as citizens the same day as Hamid’s father. Yong’s frustration leads him to hang out with local gangbagers which can not lead to anything good.

You may think that a movie that has so many characters and story-lines could become very confusing, but in the case of Crossing Over you’d be wrong. Wayne Kramer masterfully overlaps and intertwines each story so well that the direction of the movie never gets bogged down or complicated. Each story builds on and compliments the other in such a way that the result is an outstanding piece of cinema.

The performances of the entire cast from top to bottom are superior. Harrison Ford and Ray Liotta’s performances are so genuine and real. Cliff Curtis’s passion is electric. If newcomers (Chon, Eve, Bishil, Khazae) continue to give performances in the future like they did here, then they could be the next generation of Hollywood stars.

Crossing Over is successful because of great acting and exceptional storytelling. This movie may have been a limited release, but it is an entertainment blockbuster. Watch it!