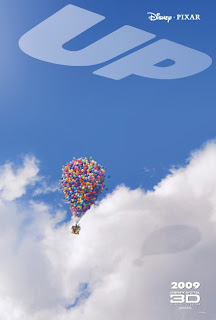 Up is the best animated film since Meet The Robinsons. Both films are unabashedly sentimental fables about the broad strokes of life. While Meet The Robinsons dealt with a young orphan boy who learns to accept the hardships that early life can bring, so that he can ‘keep moving forward’, Up is about a man at the end of his life, with seemingly nothing to live for except to look backwards with fondness and regret. At the risk of scaring off would-be viewers, it is the most achingly sad romantic fable since Away From Her. And while I wouldn’t recommend it as a casual date movie, and I’m not sure how it will play as a family film (since the kids might wonder why mommy and daddy are crying), it is a gloriously beautiful adventure film that will likely remain the finest film of 2009.

A token amount of plot – Elderly Carl (Ed Asner) has just buried Elle: his wife, his childhood sweetheart and his best friend. Waking up without any purpose to his life, he simply sits on his couch, mourning both his loss and the one adventure that his wife and he never got around to taking (life kept getting in the way). After circumstances put both his house and his freedom in jeopardy, Carl decides to live out Elle’s childhood dream (traveling to South America and living in a house on the mountaintop next to the theoretical Paradise Falls). Using leftover balloons from his days as a balloon peddler, Carl sets sail as his entire home floats into the sky. As he embarks on one final adventure to keep a promise, he soon discovers that a young ‘wilderness explorer scout’ has accidentally stowed himself away on the front porch.

That’s all you get. I wouldn’t dream of revealing what Carl encounters on his journey. It offers up its visual pleasures without explanation and without apology, knowing that it has earned its right to its own imagination. The film is surprisingly simple, with a relatively straight-ahead narrative that takes only a few twists along the way. As he and the young boy bond through their mutual grief (young Russell is mourning the apparent divorce of his parents and the absence of his father), Carl desperately tries to get his house to the falls before the helium runs out. Despite the melancholy undertone, this is, similar to the last Indiana Jones picture, an often rousing story about a man nearing the end of his days discovering that he still has a life left to live.

While the film is basically about death and the fragility of life, Up is every bit as funny and exciting as any other Pixar film. The ‘talking dog’ (via electronic collar) revealed in the previews is just the beginning of the glorious discoveries that are in store. The animation is, of course, astonishing, with rich bright colors and vivid details around every corner. The score by Michael Giacchino is every bit as rousing as his work on The Incredibles. And the vocal work (mostly filled with actual voice over artists, save for Delroy Lindo and Christopher Plummer) is splendidly low-key and naturalistic and always at the service of the story (Ed Asner is wonderful per usual, although most of Carl’s best moments are silent ones). Even if kids don’t get the heavy dramatics at play, there are plenty of laugh-out-loud gags and gee-whiz action scenes to keep them enthralled.

Up is a wonderfully touching, openly dark, and surprisingly surreal adventure story. To call the picture ‘sentimental’ would be an understatement, as it is often an ode to sentimentality. It uses wordless montage and the power of silence every bit as effectively as Wall-E and it’s often just as action-packed as The Incredibles. It is a beautiful story, gloriously told with rich and vivid characters, eye-popping visual splendor and acknowledges the complete despairs and utter joys of life in one fell swoop. It is the finest film of 2009 and one of the finest animated films I’ve seen in my lifetime. Up is just that good.

MY TOP ELEVEN MOVIES OF THE YEAR (YES ELEVEN, I THOUGHT I WOULD SPICE IT UP A LITTLE)