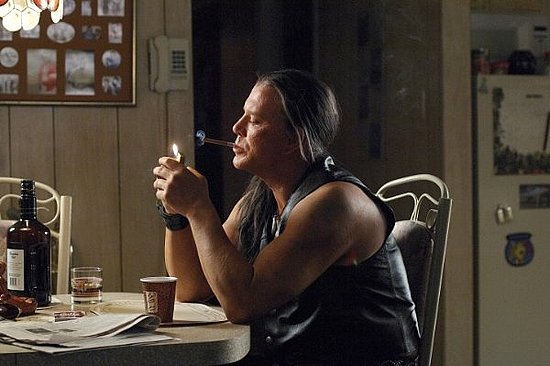 Killshot is available on DVD.

Mickey Rourke was a forgotten actor for many years. He was once thought to be the next big Hollywood star after appearing in hit movies like Body Heat (1981) and Nine 1/2 Weeks (1986). His rising star started to fall, however, after a string of flops including Harley Davidson and the Marlboro Man (1991).

At one point, Mickey gave up acting to become a professional boxer. He began learning boxing as a young boy. His amateur record was 20 wins (17 knockouts) and 6 loses. After suffering a couple of concussions as an amateur, he gave up boxing. As a professional, Mickey was undefeated in 8 bouts and hoped for a world title fight. He would give up boxing again after enduring severe facial injuries that would require several operation to repair.

Mickey would burst back onto the Hollywood scene with his performance as Randy “The Ram” Robinson, an over-the-hill pro wrestler, in the smash-hit The Wrestler (2008). He would win a Golden Globe award for Best Actor for this role and be nominated for an Oscar too. Killshot is Mickey’s followup movie after The Wrestler.

Killshot, directed by John Madden (Shakespeare in Love) and written by Hossein Amini (The Four Feathers), is based on a 1989 novel with same name by Elmore Leonard. After years of sitting on The Weinstein’s production company shelf and following many changes in actors, directors and producers such as Viggo Mortinsen, Robert DeNiro, Tony Scott (directing) and Quentin Tarantino (producing), Killshot was released (at 5 theaters in Arizona!!).

Mickey Rourke plays Armand “The Blackbird” Degas, a half-breed Native American that happens to be a hitman for the mob. After Armand kills one too many people in his last hit, upsetting his mob boss, he returns to a reservation in Michigan where his grandmother lives, to hideout. It is there that he meets a modern day Billy the Kid wannabe by the name of Richie Nix (Joseph Gordon-Levitt, Miracle at St. Anna), who takes Armand and his car hostage so he can use it on a big job that he has planned. After Armand reveals his true identity to Richie (with a gun to his head) and thinking that Richie reminds him of his dead younger brother, Armand decides to join up with Richie. Their plan is to rob a local real estate office for $20,000.

Real Estate agent Carmen Colson (Diane Lane) and her iron worker husband Wayne (Thomas Jane) are attempting a trail separation in their marriage. This is more Carmen’s idea than Wayne’s, who is hoping to repair their marriage. When Armand and Richie show up to get their money, Carmen and Wayne are in the wrong place at the wrong time. After the robbery attempt is botched and Carmen and Wayne have seen Armand’s face, there is only one thing that can happen according to the hitman’s rule book. They must die.

It is hard to buy Mickey Rourke as part Native American no matter if he braids his hair or if he wears Native American jewelry. While Armand does not have as many levels as a character as Randy “The Ram” did, Mickey is still able to pull off being a convincing hitman. Diane Lane and Thomas Jane are both talented performers and they show it here. Joseph Gordon-Levitt is wonderful in his portrayal of the wild and uncontrollable Richie. Rosario Dawson (Seven Pounds) has a unnoticeable bit part as Richie’s Elvis loving girlfriend Donna.

While John Madden and Hossein Amini are successful in creating tension in some parts of the movie, there are more spots were there is a lot of sitting around and waiting that really drags down the suspenseful pace that is desired. The marriage problems of Carmen and Wayne seem out of place with the rest of the story and also help bog down the pace.

Killshot is pretty good, but for my money the best hitman movie is still The Professional (1994) staring Jean Reno.