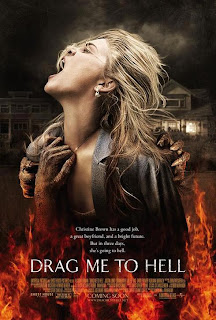 Drag Me to Hell is a throwback to a time, in the mid-1980s, when horror films were fun first and scary second. Before the genre became a battle of the franchise bogeymen, before the advent of English adaptations of Asian fright fests, before the onslaught of gorier, more drawn out violence (itself a theoretical callback to the 1970s), there was a time when horror films just plain fun. This new Sam Raimi picture is not terribly frightening, as the nature of its premise all but states that the would-be scares are without consequence. But it does have energy, an eagerness to entertain, and an old-school 80s fun house spirit, and it has all three in spades. As a bonus, it’s the rare theatrical horror movie that isn’t a remake or a random ‘dumb kids get lost in the wood and get butchered’ narrative. It is a real movie, with a real plot and plausible characters at its core. Drag Me To Hell may not be shiver-in-the-dark scary, but it is a trashy B-movie blast.

A token amount of plot – Christine Brown (Alison Lohman, in a somewhat overly on-point performance) is a young loan officer pining for a promotion to assistant manager. Wanting to avoid appearing like a push over in front of her boss (David Paymer), she declines an elderly gypsy’s request for a mortgage extension, dooming the woman to foreclosure. As a result, the old woman (Lorna Raver) lashes out in anger, cursing Christine and condemning her to an eternity in hell, but only after three days of psychological and emotional torture (you know, for fun).

The majority of the narrative concerns Christine’s attempts to rid herself of this damnation, all while trying to appear normal to her boss, her boyfriend (Justin Long), and her boyfriend’s theoretically disapproving family. Needless to say, the gypsy curse gives director Sam Raimi an excuse to throw whatever whacked-out effects work he wants at the screen, all in the name of startling the audience into nervous laughter. Since the premise dictates a certain lack of onscreen physical violence or gore, Raimi uses his PG-13 instead to show all kinds of old-fashioned gross-outs, jolting ‘gotcha’ moments, and plenty of ick. It works more often than not, but the underlying premise dictates that nothing will actually happen to our heroine until the three days expire (assuming she can’t break the curse, of course). Save for the brutal and terrifying prologue, all of the subsequent scares will simply be false alarms or intentional mind games on the part of the various evil forces at work. It’s popcorn-flying fun, but it’s not scary.

Whether this is an issue is up to you, but the picture works on other levels to compensate for the lack of bone-chilling terror. The characters are relatively fleshed out, which is a refreshing change of pace in this genre. Justin Long is quite good here, giving Clay Dalton a strong but plausible protective streak. Even Clay’s would-be villainous mother is given a scene of empathetic humanity. Rham Jas is terrifically engaging as a believing psychic, especially as this is his feature-film debut (next up, James Cameron’s Avatar). And while David Paymer flirts with cliche as the snarky bank manager, it is awfully nice to see this underutilized actor in a high profile movie again.

While this is being hailed as director Sam Raimi’s return to the horror genre that made him a legend, this is a very different kind of picture than the Evil Dead series. While the visuals and the camera work will remind even the casual fan of Bruce Campbell’s various horror pratfalls, this is, if anything, an attempt to put those kind of cinematic tricks into a movie with an actual plot and actual characters. By all objective standards, this is a genuinely better film than any of the Evil Dead pictures. Amazingly, Bruce Campbell does not make a cameo in this one, although that 1973 Oldsmobile Delta Royale does. It is ironic that Sam Raimi, whose The Evil Dead was one of the pioneering ‘dumb kids go into the woods and get slaughtered’ pictures, would be the one to attempt to break the horror genre free of that current rut.

The film will not leave you feeling icky or ill-at-ease. It’s not that kind of horror film. The film works splendidly as a comic homage to 1980s supernatural gross-out pictures, the kind that you barely remember watching when your parents weren’t looking (think The Gate). Despite the lush 2.35:1 wide screen cinematography, I actually think that the picture would work best when viewed on a basic cable station at 2am in the morning. Drag Me to Hell is certainly a jump out of your seat good time as a theatrical experience, but I’d only imagine that it would have scared the hell out of me if I had seen it when I was nine, on Channel 43 at 1am in the morning as I struggled to stay awake to see what happened next.