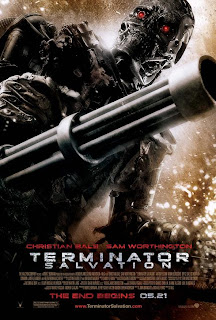 Terminator Salvation is arguably the closest thing to non-stop action since The Mummy Returns. It opens in the thick of a military operation and barely slows down for its 115 minutes. Character development is almost non-existent and the picture relies on our prior knowledge of the previous Terminator pictures. The characters are paper thin and the film has obvious signs of tinkering. Ironically, for a film that constantly opines about the strength of the human heart, the film lacks the very heart and soul that brought humanity to the first three pictures. It is occasionally a first-rate action spectacle, but it is only the spectacle that merits recommendation.

A token amount of plot: Judgment Day has come and gone, and in the year 2018 the human resistance continues to press on against the machines that turned against them and killed most of the planet. While the leader of the fighting force (Michael Ironside) clashes with the beloved John Conner (Christian Bale), a new weapon is discovered that may turn the tide for the humans. Meanwhile, Marcus Wright (Sam Worthington) awakens in this apocalyptic future with no idea why he is still alive, as his last memory was of being put to death in 2003. As he teams with a young Kyle Reese, the paths of these would-be heroes will soon cross in a way that will determine the fate of all humanity.

Oddly enough, the legendary John Conner is more or less a supporting role this time around. Despite the casting of Christian Bale and said actor’s top billing, he spends much of the film as a second banana to the mysterious Marcus Wright. Alas, Worthington’s performance does not merit the spotlight, as he spends much of the film in stock-action hero mode, with an Australian accent that comes and goes at random intervals. As for Bale, he inexplicably chooses to use his infamous McGruff: The Crime Bat voice for several major sequences. Aside from action set pieces in the opening and the climax, Bale has little to do but bark orders, give inspirational radio addresses, and fued with Michael Ironside. Ironside is tragically relegated to the role of ‘wrong-headed authority figure’, as his primary job to be wrong at every interval, for the sake of dramatic conflict.

None of the other characters are fleshed out in the least, although Anton Yelchin does the best with what he is given as a young Kyle Reese. Between this and his broad comic turn as Chekov in Star Trek, it’s obvious this chameleon-like young actor is going to be around for awhile. The women come off exceptionally poorly here. Bryce Dallas Howard is given nothing to do as Dr. Kate Conner (Claire Danes in Terminator 3: Rise of the Machines). It’s painfully obvious that her entire role ended up on the cutting room floor as she has almost no dialogue and plays no real role in the story. Worse yet is Moon Bloodgood (Blair Williams), who’s primary jobs are to look hot, get rescued by a strong handsome man, then risk all of humanity in order to save said stud whom she barely knows.

Aside from lack of character development, we never get a true sense of what it feels like to live in this post-Judgment Day world. There is no sense of the day to day life for the resistance, or for the other survivors. All jokes about ‘Reign of Fire with robots aside’, that picture gave you a true feeling of what it was like to live in a post-apocalyptic world where humans are primarily dragon food (in the end, the two pictures end up being surprisingly similar in plot). It is no secret that the eventual DVD/Blu Ray will contain 40 minutes of deleted scenes, and I’m guessing much of that will contain the missing character beats. It again brings up a troubling question… if we know full well that the film we are about to see is a studio or producer-mandated ‘theatrical cut’, what exactly is the point of going to the theaters to see what appears to be an arbitrary version of a given film?

The film also suffers from a screenplay that feels like it was intended to be a children’s picture. While the movie is loud, dark, and violent, the character beats and dialogue sometimes resemble the simplicity and over-exposition found in afternoon cartoons. There are countless instances of obvious ADR dialogue which state obvious points (‘It worked!’ or ‘We need to get out of here!’), and climactic voice over makes a point to explicitly spell out the moral of the story. Say what you will about John and Sarah Conner’s moralizing in Terminator 2, or the somewhat campy robot antics in Terminator 3, but those still felt like adult pictures made with adult sensibilities. Even though the film isn’t any less violent or grim as a result of its PG-13, it still feels like a less mature, more kid-friendly Terminator film.

Having said all that, the film primarily exists as an action picture, and on that note it barely merits recommendation. While the opening act has only perfunctory action beats, there is an extended chase scene about 40-minutes in that is truly eye-popping. The Terminator pictures have always been known for their first-act-climax vehicle pursuits and this one does not disappoint. Although the big second act action beat is unexciting because it’s relatively pointless (it’s a character who can’t die or hurt others, being chased by another character who can’t die or hurt others), the climax of the film is genuinely exciting and suspenseful. Since we don’t know how slavishly this sequel follows the time-traveling continuity of the previous films, there is genuine tension as most of the characters involved could very well be killed.

So, does the film merit viewing? That’s up to you. The characters aren’t the least bit interesting and the dialogue borders on childish (I’m particularly partial to Bale’s climactic radio address where he speaks in broad platitudes rather than explaining why the resistance should take the contrary action he is suggesting). But the technical aspects are often breathtaking and the action beats satisfy more often than not. The film is rich in atmosphere and genuinely feels a part of the Terminator mythos. It’s not required viewing and the Terminator Salvation is a deeply flawed picture, and easily the least of the Terminator pictures. But wow, that first-act chase is a knockout.