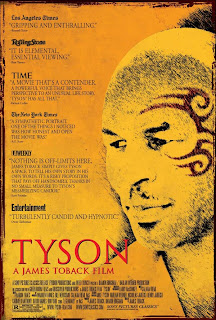 What do Henry Tillman, Alex Stewart, Michael Spinx, and I have in common? None of us have lasted even a single round against Mike Tyson. I still remember the code for Mike Tyson’s Punch Out that allowed you to skip straight to the title bout (007-373-5963), and I never, ever defeated him. For about a two-year period, I was a boxing fan. When Tyson was in his late-80s peak, I distinctly recall several of his fights on HBO. My uncle ordered the much-hyped Tyson/Spinx fight on pay per view in 1989; leaving to grab a snack in the opening round and return moments later to discover the fight was over. To this day, I can vividly remember the shock of watching the seemingly invincible Iron Mike getting knocked out by the theoretically light weight Buster Douglas in the tenth round. Like the correlation between Mark Twain and Haley’s Comet, my fascination with boxing came and went with Mike Tyson.

Just over nineteen years after that stunning upset, Mike Tyson has sat down with friend and director James Toback for a blunt and intimate discussion of his childhood, his boxing career, and the downward spiral that his life plunged into following his epic loss. Anyone with a passing knowledge will know the main details. The rape conviction and subsequent three-year prison term, the failed attempts at a comeback, the infamous 1997 incident where bit off a chunk of Evander Holyfield’s ear in the middle of a match (an incident that more or less ended his career)… they are all covered in seemingly forthright detail by the man himself.

The majority of Tyson is simply Mike Tyson sitting in a chair, facing the camera, and telling the story of his life up to this point. There are plenty of fight clips, news snippets, and other assorted visual aids, but at the end of the day, this is simply one of the most famous boxers in the history of the sport waxing poetically about his successes and failures.

While one can question the reliability of the narrator in several instances, he certainly earns our benefit of the doubt with his apparent honesty regarding all manner of bad behavior. Of his marriage to actress Robin Givens (currently a member of the Tyler Perry casting pool), he casually remarks the futility of one side accusing the other of being a bi-polar, emotionally abusive psychotic, while the other side accused their spouse of being a venomous gold-digger. He resoundingly proclaims his innocence of the rape charge that sent him to prison, and his memories of jail provide one of the highlights of the picture. The most potent moments occur as footage of the infamous ear-biting incident play onscreen, while Tyson recounts a kind of stream of consciousness of what was allegedly going on in his head during the fight.

What emerges from this narrative is a classic tale of a young man who achieved unimaginable success at an age when he was in no position to deal with the fallout. While the filmmaker is obviously a sympathetic ear (Toback has cast Tyson in two of his previous films), there are still doses of unflinching honesty to be found. What is contained here is compelling and worth listening to, but Tyson seems to be only scratching the surface. This first-person documentary is best viewed as a sort of ‘cliff notes’ for the great autobiography that has yet to be written.