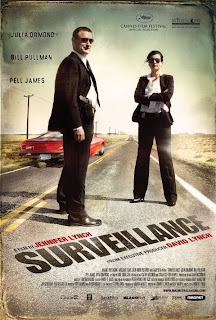 Surveillance
2009
97 minutes
Rated R
In selected theaters on June 26th and on DVD on August 28th.

Puzzle box movies are a mixed blessing. The best of them are completely absorbing and compelling regardless of their climactic reveals or final incidents. So even if you know ‘the big secret’ of The Sixth Sense, the film still works as a emotional drama about a young boy with an unimaginable problem and how it affects his relationship with his mother. And even if you know where The Usual Suspects is heading, it’s still a well-acted crime drama with a compelling narrative under its belt. But if the sole intent of a given film is to play a climactic game of ‘gotcha’ with the audience, then said filmmakers had best be darned sure that we can’t guess the big answers before we’re intended to know them. Otherwise the film becomes an exercise in tedium.

Surveillance is a movie all about deducing how a specific crime unfolded. At the beginning of the picture, there is a murder and apparent kidnapping, followed by a mass murder along a country road. The three witnesses are an eight year old girl, a strung out junkie, and a local cop. The inquisitors are two out-of-town FBI agents (Bill Pullman and Julia Ormond) who have invested months in this apparent cross-country crime spree. As the feds press the survivors for relevant information, the narrative of just what happened unfolds from several points of view, with none of the narrators proving all that reliable.

The picture, directed by Jennifer Lynch (the woman behind the infamous Boxing Helana), may very well have worked as an hour-long short film on Showtime or HBO. But this is a full-length 97-minute feature, and there just isn’t enough storytelling to fill up the allotted time. As a result, the opening act is full of atmosphere and character introduction, without a hint of actual character development or narrative progression. The film is filled with solid character actors, such as Michael Ironside, Cheri Oreri, and French Stewart, but the dialogue is shockingly bland and the cast is generally wasted. The set up is interesting and the actors (especially Pullman and Kent Harper) are game, but the film is just light on substance for much of its running time.

There are a few moments of twisted diversion. In a flashback, two cops spend their day terrorizing motorists unlucky enough to be caught speeding, teaching them to never ever break the speed limit again. And while the violence is surprisingly restrained, there are just enough moments of gore or surprise bloodletting to snap us awake. But most of the running time is basically spent waiting for the inevitable reveals, when we finally see how the mass killing played out and which characters are hiding which secrets. If you don’t figure it out early on, you simply sit there waiting for the reveals. If you’ve figured it out already, the film is almost unbearably dull.

In the end, Surveillance is a puzzle box film that has nothing to offer except the various puzzle pieces. The characters do not stand out, the drama is not compelling, and the screenplay is light on even remotely interesting dialogue. There just isn’t enough story and character to fill up a feature length movie, so the entire first and second acts just come off as filler. Considering the talent involved, Surveillance is a major disappointment.