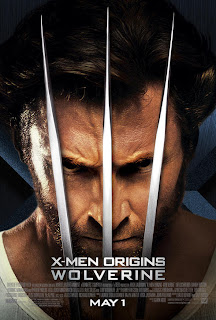 X-Men Origins: Wolverine is a film that has no particular reason for existing. It tells the background story behind a major character from the X-Men film franchise. But Wolverine was the lead character of said films, and we’ve already learned everything we need to know from the films in said franchise (like The Powerpuff Girls Movie, it is a feature length variation of an origin story that we already knew). And the extra information given here actually serves to make the character of Logan/Wolverine less interesting. It’s not necessarily that a character like Wolverine is better when his past is left a mystery, so much of that past that is revealed here is so astoundingly conventional, uncompelling, and completely cliché. In a time when even bad comic book films like The Spirit have a certain ‘are you kidding me?’ nerve, Wolverine is shocking in its adherence to formula and lack of imagination.

A token amount of plot: Born with mutant powers that consisted of healing abilities, unnaturally slow aging, and the ability to pop boney claws out of his hands, the man who would be Wolverine finds himself at home on one war-torn killing field after another, along with his friend and apparent brother Victor Creed/Sabretooth (a slumming Liv Shreiber, who does so little with the role that they should have just rehired Tyler Mane). After they are captured and unsuccessfully executed during the Vietnam War, they are both recruited into a super secret black-ops program known as Weapon X. Led by the mysterious William Stryker (Danny Huston, as the man who would be Brian Cox in X2: X-Men United), this band of super powered assassins proves too much for Logan, and he quits after Creed murders innocent civilians in an operation. Six years later, Stryker tracks down Logan with the information that someone is apparently murdering members of his old team. But before you can say Commando, the insidious plot hits close to home, shattering Logan’s world and putting him on a course to become the steel-clawed superhero we know and love.

The resulting film is every bit as predictable and dull as the information imparted above. The entire film is a muted, oddly lifeless affair. Without knowledge of the behind the scenes struggles between Fox and director Gavin Hood, I cannot say who is truly to blame. But the filmmakers seem to be under the impression that ‘dark and moody’ means visually gray and woodenly acted. Hugh Jackman does what he can with the character that he so obviously adores, but the bland, expository dialogue and routine storytelling leave him adrift. For all the blather about presenting a darker, more animalistic Wolverine, Logan is still the conflicted but generally morally sound do-gooder that he is in the X-Men pictures. Actually, within his element, he’s actually far less menacing than he was in the first X-Men, where he theoretically posed a genuine threat to the children of Xavier’s institute. He may occasionally kill his opponents, especially while at war, but he is friendly to kind-hearted older people and is no threat unless attacked first. In the end, the legendary Logan is rendered no more savage or dangerous than Jason Statham on a bad day.

That brings up another issue, which is the lack of memorable action set pieces. While the X-Men pictures were not legendary action-fests, they were rooted in quality storytelling and character-driven drama. Since those components are so lacking here, it would be up to the fights and chases to merit actually viewing this picture. But there are really only two even competent set-pieces. The first-act black-ops take down resembles a deleted scene from Spawn. The only action scenes of note are the climax and a mid-film chase involving a motorcycle against several hummers and helicopters. But, alas, every single gag in the mid-film chase has been revealed in the trailers.

The already short running time is padded with several fights between Wolverine and fan-favorite cameos. Did anyone really want to see Logan boxing Blob? As for Gambit, he barely appears and exists only to appease the few and vocal. His fight scene with Logan is especially amusing, as it causes tons of property damage without comment, and because it quickly becomes a classic ‘neither of us want to lose, but the fans want to see us fight’ smack down, resulting in no real outcome and no story advancement (see The Forbidden Kingdom for another example).

So the action is more or less dull, the writing feels like a bad television pilot, and the acting is barely perfunctory. To make matters worse, a few would-be plot twists seem specifically designed to aggravate the very hardcore fans that would theoretically flock to this picture. The climax, for reasons that I won’t reveal, will absolutely infuriate devotees of a specific fan-favorite character (for comparison, imagine if, at the end of Spider-Man 3, Eddie Brock turned into The Vulture). A couple future X-Men make brief appearances, but their roles in the narrative ends up contradicting explicit X-Men continuity. The cameo that is revealed in the previews is especially odd, as Scott Summers finally gets a moment to shine, in a Wolverine spin-off of all things. This is of course ironic since Cyclops constantly had his story lines muted or stolen in the X-Men pictures by filmmakers who wanted to emphasize Wolverine at all costs.

Between Deadpool, Sabretooth, Gambit, Agent Zero, and Kestrel, 20th Century Fox could have started a whole new Weapon X franchise. Alas, none of these characters are even remotely developed. Dominic Monaghan has a moment of bitterness and regret as a light-controlling mutant named ‘Bolt’, but he’s brushed offscreen right before he gets interesting. None of the other c-level X-universe characters make any such impact, and nonfans will struggle to remember their names as the credits role. Ironically, this is as much of a franchise killer as Stephen Summer’s Van Helsing (which also starred Hugh Jackman), which wrecked the film making potential of the entire Universal monsters library for several years afterward.

It’s been awhile since such a major tent pole picture that felt so lifeless and ordinary. The plot and story are Mad Libs by the book. The writing is shockingly lazy with even the simplest details (certain supporting characters are rarely if ever referred to by their names, leaving the audience wondering who they are), and the action scenes vary between dreadfully dull, completely pointless, and utterly ridiculous. This film is the kind of bland and boring assembly line product that makes me appreciate the ambitious comic book films that I didn’t care for (Spider-Man 3, Superman Returns, The Spirit, etc) and it makes me a little less hostile toward the lousy comic book adventures that at least had a junky spark (think Ghost Rider or Judge Dredd). Tragically for all involved, X-Men Origins: Wolverine is the worst major comic book adaptation since Catwoman.