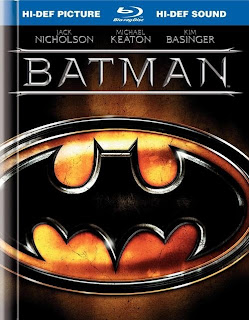 How exactly does one objectively review a film that is arguably their favorite film of all time? What, you say? Scott Mendelson’s favorite film of all time is Tim Burton’s Batman? Yes, yes, while Batman Returns may be the most haunting Batman picture, and the Nolan pictures are probably ‘better movies’, it was the original 1989 classic that made me the Bat-freak that I am today. Sure I collected the Super Powers action figures from the mid-80s, and I had a general knowledge of the character, but it wasn’t until 1989 that I became a die hard Batman fan. While countless moviegoers became geeks for Bats in the summer of 1989, I stayed that way for twenty long years (close friends, family, and coworkers long noticed that my email address begins with ‘JckNapier’). My fandom of all things Batman has reached the point where my wife keeps threatening to throw a Batman/Joker-themed birthday party next year when I turn 30.

Regardless of your personal feelings about the film, it was and remains a milestone in both genre film making and box office history. I’m planning to go into much detail about the film’s long term cultural impact (both good and bad) in a piece to be published on June 23rd. For now, let us acknowledge that the film was and is a character-driven mood piece that genuinely honored the traditions and characters of the original myths. For everything it got wrong about the mythos (Jim Gordon is a non-entity), it gets so many little pieces spot on (the flowers in the alley, the Joker venom, the early inclusion of Harvey Dent). It was a dark, brooding action drama that pitted the greatest yin/yang match up in modern literary history against each other in a violent clash for the soul of a city. The silent, stalking Batman vs the deranged, comical, homicidal Joker… it wasn’t perfect, but it was awfully great. Be it the thunderous, classical Danny Elfman score, the over-the-top scene stealing villain, or the idea that a property appealing to kids didn’t necessarily have to be appropriate for them, every subsequent comic book adaptation as well as every superhero movie or fantastical action adventure picture that followed owes one thing or another to this groundbreaking epic. 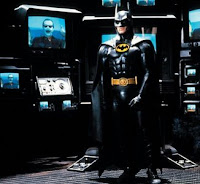 In many ways, Batman is an explicit adaptation of the very first Batman comics, from around 1939-1941. In those tales, the would be Dark Knight was a menacing, shadowy figure of the night. He wasn’t charming, he wasn’t polite, and he actually killed people until Robin came along in 1940. The city was an art deco world of brute, murderous thugs and Gotham City (originally just New York) was a place where grotesque villains slaughtered cops and civilians wholesale (life was pretty worthless in those original tales, with Dr. Strange killing thousands in a single rampage without a second thought). Bruce Wayne was a boring, non-celebrity socialite of little consequence to the city as a whole. Batman Returns felt like the Batman of the late 1980s/early 1990s. Batman Forever represented the action-adventure peak of the 1970s Dennis O’Neal, Neal Adams Dark Knight Detective era, with some unfortunate 1950s camp tossed in for good measure. Batman & Robin represented not the whip-smart campy TV show, but the low water, fangless Batman books of the late 1950s and early 1960s – after Seduction of the Innocent but before the Julius Schwartz revival of 1964. For the record, the Nolan pictures seem to be a hybrid of Joseph Loeb melodrama, mixed with the gritty realism of Ed Brubaker and Greg Rucka.

I’ve gone into great detail of the character of Bruce Wayne/Batman here. I’ve also gone into a bit of detail comparing Jack Nicholson’s Joker to Health Ledger and Mark Hamill. I assume if you’ve read the proceeding paragraphs and presume me insane or delusional, you’re probably not going to buy this disc anyway. So let’s move on to the Blu Ray itself.

The Blu Ray disc is housed in one of Warner’s collectible ‘book’ packages. While it looks gorgeous, it is differently shaped (taller, slightly thicker) than the standard Blu Ray case. It also looks like a book so it’ll stick out like a sore thumb on your shelf, if you care about that kind of thing. The contents are the disc itself, and a separately housed digital copy. Included in the book packaging is a fifty page booklet containing a sampling of several pieces of Batman memorabilia. Contained within are sixteen random pages of Batman: The Official Book of the Movie, the first nine pages of the original screenplay, twenty pages of the comic book adaptation, and four pages of updated cast and director biographies.

Aside from the packaging and the book samples, the disc is absolutely identical to the Blu Ray that was released as part of the Batman Anthology collection a couple months ago. That set had identical content to the DVD Batman Anthology set that was released in October, 2005. Obviously the picture and sound have been upgraded to Hi-Def standards. The video is a lovely, bright, and relatively spotless 1080P transfer. Now the picture was shot using a slightly fuzzy grain of film, so it was never going to be a reference quality visual. But the picture looks brighter and warmer than it probably looked even in theaters, so I don’t think anyone will be disappointed. As you all know I don’t have surround sound, so I can only say that the English 5.1 TrueHD contained crystal clear dialogue and sharp distinction between dialogue, sound effects, and Elfman’s magical score.

Extras you say? Well, fans like myself were clamoring for true special editions of the original Batman pictures since 1997, and it took Warner Bros. eight years to respond. But the wait was worth it. All four films in the series received absolutely jam packed reissues. And almost all of the content was of a high quality, with brutally honest interviews (everyone on the Batman & Robin documentaries basically falls on their sword and apologizes) and plenty of archive behind the scenes materials.

The 5.5 hours of material includes –

None of this material is upgraded to 1080i or 1080p, which is unfortunate but forgivable. Some notes on the copious extras. First of all, nearly every one of note is featured in one form or another in the exhaustive and detailed making of material (even Jack Nicholson sat down for new interviews). Second of all, regarding the music videos… they may be terrible, but Prince, dressed in full Joker garb, looks more like the comic book Joker than any live action actor to date. Finally, the biggest treat on this disc is the animated story board for the deleted Robin introduction from Sam Hamm’s original screenplay. Not only is it animated and complete with vocals and sound effects, but the disc producers actually got the voices from Batman: The Animated Series (Kevin Conroy, Mark Hamill, and Efrem Zimbalist Jr,) to voice their respective roles. So, if you ever wanted to know how Mark Hamill would sound reading dialogue from Tim Burton’s Batman, now you know.

If you already own the boxed set that was released previously, there is no real reason to get this stand alone Blu Ray. If you only liked the first film and didn’t want to buy the four-film set for whatever reason (maybe you didn’t want the Joel Schumacher pictures, or maybe you didn’t care for Batman Returns), here’s a prime chance to pick up the first Batman film, the one that defined the modern comic book film. A solid transfer with incomparable extras, this is just a great, fun disc that rivals the best special editions on the market.