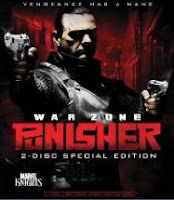 Perhaps there are some comic book characters that just aren’t as enticing to moviegoers in the same way as say, Iron Man, Spider-Man, or Batman. In my estimation, Marvel Comics’ anti-hero Frank Castle, aka The Punisher, would be one of those characters that only commands a much smaller niche audience than the aforementioned ones. This thought is further supported by the fact that in 1989 the character arrived on the big screen in what could easily be called one of the worst comic book adaptations ever made, not to mention it was just a horrible movie in general. In 2004, the character made a resurgence on the silver screen in a much more faithful and enjoyable adaptation that produced decent numbers (when combining the theatrical and DVD releases), yet still was viewed as a less than stellar release for a Marvel Comics film adaptation. Which brings us to the 2008 release of “Punisher: War Zone”, the third, and based on the horrible numbers it pulled down at the box office, most likely the final attempt at finding success for the character on the big screen.

“Punisher: War Zone” follows the extreme vigilantism of former Special Forces operative Frank Castle (Ray Stevenson). He is a man whose family was murdered before his eyes, and he now wages a seemingly endless war on the Mafia as the killer of killers known as The Punisher. During his latest mission in his self-declared “war”, Punisher targets mobster Billy Russoti, and in the process inadvertently finds himself in the middle of an undercover FBI investigation. Due to his interference, along with the ever-increasing body count of Mafia hoods filling city morgues, Punisher finds himself having to elude the law, while trying to finish what he started with the Mob.

This latest film iteration of Marvel Comics’ skull-clad anti-hero is a mixture of good and bad, resulting in a movie that will miss more moviegoers than it hits. Let’s start with what this current adaptation actually did right. As a comic book fan, I found this version of the character was much more accurate to the source material. From the location of the film being set in New York City, the appearance of Ray Stevenson in character looking as if he just walked off the page of the comic, to the inclusion of the characters of Micro and Jigsaw, so many elements within this movie made this the most accurate depiction of the character we’ve seen, and most likely will ever see on film. The action is fast-paced and very brutal, and at times it can be quite inventive. Plus, I would be remiss if I didn’t admit that it is kind of nice seeing such evil people getting their come-uppance.

Now, on to where the film went wrong, something that occurred frequently throughout the movie’s duration. For starters, why were there so many unnecessary bouts of over-the-top performances that at times wandered over into the despicable realm of camp? Whoever had the idea to give the film’s primary villain, Jigsaw, some of the dumbest moments in the film really should have thought twice about it. For me, I find it hard to take a character seriously when he acts so stupid and childish several times over the course of a movie. While on the topic of bad character choices we can’t forget to mention that the characters Loony Bin Jim and Detective Soap were two of the most annoying, and utterly pointless characters within the film, and truthfully every time they appeared on-screen the film’s standards began to drop even further (not that they were all that high to begin with). I mentioned the action as being a plus; well it’s also a minus for this film. This is due to the fact that the action appears to be the only driving force in this movie, the story takes a distant second or maybe even third in the grand scheme of things. While I am a fan of action films, I typically enjoy the ones where the movie doesn’t feel like one excessive fight after another. On top of that the violence is extremely gory, not all that big of a deal to me most times, but when I’m not supposed to be watching a horror film I don’t expect there to be buckets and buckets of blood being spilled across the screen (to the extreme that would make the most ardent of slasher film fans happy). Lastly, the story, written by Nick Santora (“The Longshots”) and Art Marcum & Matt Holloway (“Iron Man”), is extremely thin and at times finds itself on the verge of becoming non-existent. While it does contain just enough detail to loosely hold everything together, there are too many missed opportunities to capitalize on character development or even just include a slight bit more exposition on how a character knew to do this or that or go here or there. Had the writers gone through the extra effort it would have gone a long way in making this a better film.

As for the cast of this film, they may not be the same caliber of talent as most Hollywood A-listers, but they do a decent job with what they’ve been given. Ray Stevenson (TV’s “Rome”), as I stated earlier, looks just like the character from the comics, and his performance is solid given what little he had to work with. I personally preferred Thomas Jane as the character, he just seemed like a more talented actor, not to mention his whole movie I found better than this one, but Stevenson’s interpretation was a close second. Portraying the villainous Jigsaw is actor Dominic West (“300”). So many things went wrong in Dominic’s performance, he’s over-the-top in most of his scenes, and on top of that his make-up is some of the worst I have seen in a film in quite some time. Honestly, I’m surprised and disappointed that anyone felt that any portion of Jigsaw’s character was done correctly as both a fully-developed character and an adaptation.

In the area of the supporting characters, actress Julie Benz (“Rambo”) was essentially wasted in her role as a widow to a fallen undercover FBI agent. Julie does a good enough job with the lame story arc that her character is given, but her whole portion of the movie could have been removed, because its only purpose was to make the Punisher appear to have a softer side (which isn’t like his comic book counterpart at all). The character of Micro, the weapons supplier for Punisher, as played by Wayne Knight (TV’s “Seinfeld”) was not much more than a cameo, and aside from being a nod to the comic book, he wasn’t really all that important to the story as it turns out. Plus, if you aren’t familiar with the comic books his involvement with Punisher and importance to him isn’t very obvious, so you find yourself wondering, “Why does Punisher even care about this guy one iota?” This was just a prime example of how a little bit of character development and/or exposition would have benefited the story.

Finally, “Punisher: War Zone” isn’t a horrible movie, and I would say it falls somewhere in between the 1989 disastrous attempt and the much better 2004 remake. If you are a fan of the character, then you will probably find that this movie is worth watching once, and who knows, you may even enjoy it. Personally, I believe if you took the best parts of the 2004 film and mixed it with the best portions of this one (which only amounts to about 30 or 40 minutes) then you could really have a terrific Punisher movie. That being said, I don’t believe there needs to be another movie featuring this anti-hero. I think three is plenty, and since it doesn’t appear that they got it perfectly right on any of the attempts, I don’t think number four would fare any better.