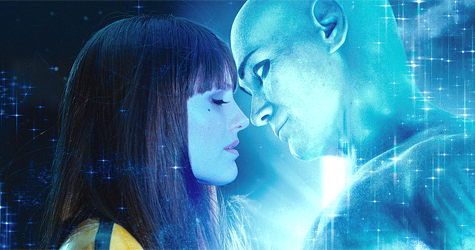 Say what you like about Director Zach Snyder’s adaption of the dark, brooding and emmensely popular 1985 Graphic Novel, but any film that gets this much discussion in it first few days is obviously onto something. Yes, much of the discussion is negative, either from upset loyal fans at the altered ending or missing subplots, or from newbies who thought they were gonna watch another superhero saves the day epic. Both of those arguements are, well…kinda stupid.

“Watchmen” is unlike any other Graphic Novel written and vastly unlike any other previously adapted by Hollywood for the movie screen. It is a Graphic Novel listed on several prestigious lists for “best literature of the 20th century” and made TIME magazines “Top 100 novels of all time” list. It is a book with a strong, passionate following, and one whose author (Alan Moore) was so against being adapted, that he didn’t want to be credited in the movie. From what I’ve heard so far, and read in reviews, speaks to this. Is the movie as good as the Graphic Novel? No. But, its also not bad either. Also, to be fair, its not great, by any stretch of the imagination, but it is hella good…and if you’re paying attention (hint hint to all those people looking at there watches), it is also a very rewarding film. Much more so if you have read the source material.

In that respect, as a newer fan of the material (admitedly, my first few attempts to read it fell short, because of boredom and confusion), the film is VERY rewarding and fascinating to watch the subtle film clues and set-up to the films final revelations. (Spoiler Alert from this point on) For example, as the Comedian is attacked in the opening scene, the fact that a knife flies into a framed poster of Miss. Jupiter was tremendously awesome. Also, seeing the picture of Laurie in the comedians bedroom when Rorschach is investigating is a wonderful easter egg of a clue. Simultaneously subtle, rewarding for knowlegiable fans and something newbies will no-doubt pick up on with enthusiasm upon a second viewing. Things like this, and the emmaculately done opening credits scene, adapting Hollis Masons novel “Under the Hood” brillantly (and far more entertaining than in the graphic novel), and showcasing the rise and fall of the first generation of super heroes with subtle clues, easter eggs and pop culture references.

Infact, for the first hour or so, the movie feels almost exactly like the graphic novel. Snyder painstakingly recreates iconic panels from the comic and sets the plot into motion flawlessly, setting up the past horrific deeds of the comedian in relationship to the other characters in the story. If I had one complaint, all-be-it a small one, it is the choice of pop music in much of the movie. Many of the song choices seemed highly inappropriate and often distracted from the emotional narrative of the scenes. One example I hated was hearing Leonard Colton’s “Hallelujah” during Nite Owl and Silk Spectre’s passionate love scene, not to mention Snyders cheesy use of the flame thrower at the moment of climax.

In there lies the ultimate paradox about the film. While the first hour is amazingly well done and extremely, painstakingly faithful to the novel, the last 90 minutes or so begin to take some big liberties, in particular in Act 3 of the film, most notably the final twenty minutes. While the film unflinchingly detours, like the novel, to give us backstories and origins about the anti-heroes we’re meant to indentify with, it also leaves much of the big picture moments out of the movie. Going in, I wouldn’t have dreamt I would miss the newspaper vendor’s plotline, or the kid reading the pirate comic (although that is apparently an anime coming out soon on DVD), or the Psychiatrists unraveling home life as he delves deeper into the mind of Rorshach/Walter Kovacs. I wouldn’t think it possible to miss the constant street chatter among nameless characters talking about the threat of nuclear apocalypse, or the plotline between the two lesbians, but I did.

Thinking about it afterwards, I was trying to figure what was missing. Yes, I walked out of the theater about 85% happy with the experience of seeing “Watchmen” on the movie screen. Doctor Manhattan looked every bit as awesome (and nude) as he did in the comic, more so with special effects. Rorschach was brought to life flawlessy by Jackie Earle Haley, who so effortlessly inhabitaed that character and sounded like him that it was almost creepy. He embodies that character, and sadly, acts better with that amazing mask (disappointingly not explained in this cut of the film, however a 3 1/2 hour directors cut is due on DVD!) and through the mask, than many of the other characters in the film. Jeffery Dean Morgan is remarkable as the comedian. One of, if not THE biggest “jokes” of the story is setting up this character as horrible, unredeamable and without redemption. We see him shoot a pregnant vietnamese girl, we see him shoot tear gas into a rowdy crowd, attempt to rape Miss. Jupiter, and burn men alive while smoking a cigar and laughing gleefully. We aren’t supposed to be sympathetic to him, but the performance by Morgan is legendary. He makes us feel for him, and more so, he makes the film earn the ultimate revelation and twist, set up so brilliantly throughout, beginning with that knife smacking into the picture.

After that, the cast isn’t great. Ozymandias does not come off as “the smartest man on earth” for even a second, and doesn’t seem to feel the burden for his ultimate “villainous” scheme, which is also drastically altered senselesly, and much of his plot seems to suffer because of the performance. Dan Dreiberg/Nite Owl is hit and miss. Mostly I like him, he looks the part very well, and plays the slightly overweight, washed up superhero with intimacy issues very well. His crush on Laurie is played to perfection, but then Snyder doesn’t give us the same payoff as in the book. A crucial revelation is missing from the moment Dan and Laurie first attempt sex and the moment they finally do on board Nite-Owls sleek looking ship after saving would-be fire victims (the only moment of “heroism” in the movie, it should be noted). While Snyder, as in “300”, certainly knows how to frame his sex and violence scenes very well, this scene, although hot in its own way, isn’t the tender payoff to a subplot we deserved.

Which brings us to Laurie, played by the very gorgeous but very dull Malin Ackerman. There were at least five scenes where it physcially hurt me inside how little emotion she put into KEY scenes of the story. Clearly Snyder didn’t care, and was probably just ecstatic to find such a beautiful actress who looked the part, filled out costume (amazingly well) and was willing to take her clothes off. Ackerman is literally carried in each scene she is in, except for most of her main plot with Dan, where niether of them seem to act well or feel there characters emotions. Her climatic, and extremely important scene on Mars with Jon is only so-so, made cool mostly because of the visuals and Billy Crudup’s masterful performance as Dr. Manhattan, a “Superman” type of character who has lost touch with his connection to people and views time and space as one.

Infact, the best part of the film for me is the translation of Chapter 4 of the graphic novel, where Jon is staring at the picture and explaning to the audience (and himself) how he sees and views time. We are given a chaotic, but masterful adaption of Jon’s past and tragic accident, done almost flawlessly to the book. But while Snyder clearly loves the material, and seemed to mostly get the main points right, he lost much of the books tension and fear of nuclear war. Losing the many subplots I mentioned before is a large reason for this, and I can’t imagine they would’ve added much to the 161 minute film. I already look forward to the directors cut DVD very much.

Overall, the film is a very visceral and psychological experience and one you have to be willing to get caught up in. It moves at a novel’s pace, very deliberately and without remorse. The film has only maybe 4 or 5 brief action sequences, and one or two brief sex scenes. This is nothing like ANY adaption of comic books or graphic novels you have seen before, or are likely to see again. I do imagine many people will hate this film, mostly newbies who will most likely feel bitter and left out, as the film does seem to be made by fans of the book, FOR fans of the book, who can fill in the gaps for themselves, having read the material. While the main story is there, you still need to pay attention to take it all in. This isn’t a film for most modern audiences, and in that I applaud Snyder enthusiastically. For a young director with basically two successful movies under his belt, to try adapting such a precise, deliberate and mostly narrated comic book/graphic novel, and to do so faithfully (mostly) is astounding.

What I mean, when I say this is not for most modern audience members, is that nothing is tidy, pleasant or happy. Heroes cleave skulls, ignite people with flame-throwers, drink too much, rape one another, shoot people, spring people from jail and are also, at times, horny as hell. I’m sure many parents will be horrified to discover this, and that makes me laugh to no end. Most importantly, and I suspect this is why so many people were constantly looking at there watches, complained and walked out in the final act…the film doesn’t wait for you to catch up. It keeps moving. You’re either on board, making the subtle connections, or you’re not. It also doesn’t have a tidy, lets explain everything ending. Much of the ending, while altered in the movie, is still ambiguous and not fully explained. Modern audiences don’t tend to like that. I, on the otherhand, LOVE IT.

All in all, the film is very entertaining…especially if you know what you’re in for, and for those willing to ride along, its a hell of good ride, flaws and all.