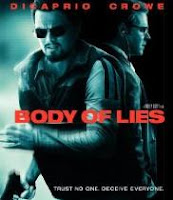 Following the previous 2008 entry (which was Don Cheadle’s average at best thriller, “Traitor”) into the ever-expanding sub-genre of movies focused either directly or indirectly upon the ongoing War on Terror is Ridley Scott’s latest Russell Crowe collaboration, “Body of Lies”. As so many of these types of films have proven over the last couple of years, audiences don’t really want to pay to watch a fictionalized account of a conflict, or something related to it, that they can watch for free on their televisions. But, does “Body of Lies” manage to side-step this major obstacle that many of its predecessors have fallen prey to, making this one of the rare exceptions, such as “The Kingdom” that actually manages to entertain, rather than simply remind us all (unnecessarily, by the way) of what’s going on over there?

“Body of Lies” is a widespread tale of political intrigue and espionage that follows CIA agent Roger Ferris (Leonardo DiCaprio), as he and his boss, Ed Hoffman (Russell Crowe), follow the trail of a deadly terrorist leader throughout the Middle East.

Written by screenwriter William Monahan (“The Departed”), the story for “Body of Lies” works very well during the first half of the film. Monahan keeps the plot moving along at a very comfortable pace that doesn’t rush the story or allow it to become confusing. He gives the audience time to process the information being presented to them, for a moment, before moving on to the next piece of the puzzle (something that other films like this should maybe take note of.) When the story is focused on the espionage and politics of conducting the war from the perspective of those actually doing the legwork the film works extremely well, and is very entertaining; however, approximately halfway through the movie the story hits a massive snag that it never seems to fully recover from.

The snag is a romantic plot development that feels tacked on to appease the female members of the audience who may not be as into the spy stuff that has dominated the majority of the film thus far. I’m not against there being any kind of romance in these films, but this one in particular felt unnecessary and frankly, hard to believe. I mean, Ferris (DiCaprio) is an undercover agent working essentially behind enemy lines, and yet he never really stops to think that perhaps starting a relationship while taking on such high risk assignments might be a bad idea? Give me a break. I will give William Monahan some credit though, because he did still manage to give me some surprises in the latter half of the movie, even though the story’s focus and overall tone seemed to have shifted due to the romance. While the twists were somewhat surprising, the plot points leading up to them in the second hour were far too predictable, and at times frustrating when you stop to think that the first hour was very well crafted and top of the line by comparison. What I wish could be done is have William Monahan go back and re-write the last half of the script, completely removing the uninteresting romantic angle, and just focus on the tension-filled action and intrigue that comprised the far superior first half of the film. Had the film worked out that way, then it would have become the best of its sub-genre; instead of being just barely above average.

To director Ridley Scott’s (“American Gangster”) credit, even though the film’s story stumbles along in the final half, he does manage to keep things interesting thanks in no small part to his fast-paced, kinetically charged style of directing. The use of the handheld camera was a smart choice, allowing the audience a sense that they are right in the middle of all the action; therefore keeping them interested and involved to an extent. It was a very wise move on the director’s part, and one that most likely kept the movie from being completely derailed by a much weaker secondary storyline that become the primary near the end of the film.

Even when this film began to stumble around, stars Leonardo DiCaprio (“The Departed”) and Russell Crowe (“Gladiator”) continued to lend their best efforts to keep the quality of the film elevated as much as possible. DiCaprio continues to impress me as an actor of great range, depth, and talent with his recent crop of dramatic work. Back when he first became a huge star thanks to the extremely overrated mega blockbuster “Titanic”, I thought he was only alright, but not the kind of star that would really have any kind of staying power. However, after his remarkable performance in “The Aviator”, followed by “The Departed”, I am being forced to change my opinion regarding his talents. With Russell Crowe I didn’t really know much of his work prior to the smash hit “Gladiator”, but since then he has consistently remained one of the best actors of his generation, a testament which he has proven true time and again with many classic roles in films, such as: “Cinderella Man”, “A Beautiful Mind”, and “American Gangster”.

DiCaprio’s character of Roger Ferris is a man who is very complicated, and apparently extremely contradictory in his motivations and sense of duty. On one hand he appears unwavering, cold, and calculated towards his duty to protect his country and its interests, which at times calls for rather extreme measures to be taken; however, on the other hand, he conveys a sense of regret for some of his actions and questions whether he is doing the right thing. It is this duality that makes his character appear interesting and more human, yet also makes one wonder about how consistently he has been written. For example, there is an event that occurs in the film which was set in motion by Ferris, yet when completed and some repercussions are dealt, he quickly flounders on whether on not what he did was right and/or necessary (even though at the time he felt it was), and even attempts to pass the buck onto his boss. This type of floundering began to feel distracting, and coincidentally began occurring in the latter half of the film, when Monahan’s screenplay was falling apart for other reasons.

As for Russell Crowe’s performance as the conniving, opportunistic, and morally questionable Ed Hoffman, it is a very different kind of character than many of his more memorable ones from films past. Just as he had done for “The Insider” and “A Beautiful Mind”, Crowe portrays a man noticeably older and grayer than he, and even appeared to add a few extra pounds to “fill out” the character. Even with Crowe’s charismatic performance and dedication to the role, I just don’t believe that this will be one of his most revered performances of his acclaimed career. In my opinion I believe Crowe’s performance did partially suffer from the fact that most of his time onscreen was spent talking on the phone. While plenty of phone conversations have made for some truly exciting and scintillating moments in movie history, I don’t believe a character should be on the phone almost the entire time, it just feels distant and impersonal to the audience.

What started out as a really solid espionage thriller set around the ongoing War on Terror, began to collapse onto itself when an unnecessary romantic plot development caused the film to stumble throughout the latter half of the story.

“Body of Lies” is rated R for violence and language.

This is Where I Leave You