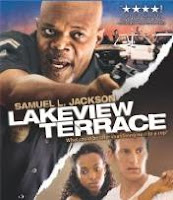 How far would you allow someone to push you before you begin to return in kind? That is the basic plot of “Lakeview Terrace” starring Samuel L. Jackson and Patrick Wilson. It’s a story of two men who find themselves locked in what seems like an unending battle of one-ups upon each other. For those of you that love movies and have seen your fair share of them, you may be thinking, “Didn’t Sam Jackson already do a film just like this several years ago with Ben Affleck?” The answer is yes, and the film was “Changing Lanes”. So, what could possibly make an actor of Samuel L. Jackson’s caliber want to do a virtual retread of a film he already did, especially when said film was quite good, albeit depressing. The only reason I can think of is that “Lakeview Terrace” could be viewed as a movie with more of a commercial appeal than the former, but if that is the primary reason (aside from the considerable payday Sam undoubtedly walked away with), was this endeavor a worthy one?

“Lakeview Terrace” focuses on a young couple (Patrick Wilson and Kerry Washington) as they begin to settle into what appears to be their dream home in the most ideal of neighborhoods. Everyone in the neighborhood seems pleasant, and as an added bonus they discover they have an officer of the LAPD (Samuel L. Jackson) living just next door. But, as the newlyweds quickly discover things may appear too good to be true, as their man of the law neighbor soon begins interfering in their daily lives in some very intrusive and increasingly creepy ways. The only question is how far will this couple allow themselves to be pushed before they choose to fight back?

If I were in charge of creating a film, and had even the slightest glimmer of hope that said film could become a hit, there would be a few aspects of the film that I would want to make sure were in perfect working order before I would even begin production. For starters, the script must be top-notch. Without a solid backbone to base the movie off of, what hope does one have of crafting a movie that will entertain audiences and keep them talking about the experience for days to come? Second, the casting must be ideal. If the cast doesn’t work well, it doesn’t matter if the script is Shakespeare or a modern classic, it will fall flat if not handled with the proper care from those speaking the dialogue. Lastly, I would try as hard as I could to keep my movie as original as possible (a feat that is harder and harder to accomplish these days), or at least avoid using tired, old clichés and predictability so that the audience will stay interested in what I’m putting on the screen. In the case of “Lakeview Terrace” some of these items were utilized to a degree of success, while others either failed miserably or seemed to be completely ignored.

As far as the story goes, “Lakeview Terrace” was well-paced, with a good story that features plenty of suspenseful moments to keep the thrill-factor up for a majority of the film. Writers David Loughery (the upcoming film “Obsessed”) and Howard Korder (“Stealing Sinatra”) have managed to take a decent premise (albeit one that has been used quite often in films), and imbue it with a hefty dose of tension to keep the audience paying attention; however, the characters are either far too clichéd or just plain unlikable to really invest ourselves in. Despite a fairly well-paced story, the movie fails in the end because I just didn’t care about the main characters at all; and for a movie like this to succeed I believe you have to be able to choose a side in the conflict or else what’s the point.

In regards to the cast, each member did well with their respective roles, even if some were overtly unoriginal and tired. For Samuel L. Jackson the part probably seemed good in conversation, but I have to think that after reading the script he should have been able to figure out that his character and the one-ups in the movie have already been done before with much greater success in previous films. Truthfully, I’m surprised he even signed on due to the fact that the basic plot for the movie is nothing more than an updated and sleeker version of his previous work on “Changing Lanes”. Whatever his reasons, at least Sam did a good job in the role, as he usually does; and surprisingly he actually delivers a more restrained performance than most, a slight change of pace for one of his many characters.

Alongside Sam Jackson we have Patrick Wilson as the new husband next door. Prior to this film I had seen Patrick in the movie “Little Children” opposite Kate Winslet (“Titanic”) and I have to say that not only did I hate that film, but I also couldn’t stand Patrick’s character either. Something about him is irritating to me, I don’t know if it’s his demeanor or presence or what, but I have a hard time actually liking any character he plays. So for this movie I did my best to suspend my loathing of Patrick, in hopes of becoming invested in his character in order for the story to work better. It turns out this was a wasted effort because the script only devotes a small amount of time early on in the film to making him seem like a likeable person, before he begins to retaliate against Sam’s character, while at the same time becoming insensitive and mean to his wife.

Speaking of Patrick’s onscreen wife, Kerry Washington does a nice job in the role, and is really the one likeable person out of the main characters. Surprisingly, her part seems very limited despite being onscreen for a decent amount of time throughout the movie; it’s just that the writers don’t seem to give her all that much to do except be mistreated by the other two characters in the film. What’s strange about her character, is that she is established at numerous times throughout the movie as a fairly strong-willed, opinionated woman, lending to the school of thought that she wouldn’t put up with too much crap from anyone. However, over the course of the film she never once stays truly angry about anything going on around her. While her character may be the most likeable in the story, she is also the most unbelievable in terms of what she puts up with from not only her neighbor, but also from her husband. A man who supposedly loves her, yet never seems to show any kind of remorse regarding things he has said and done. So for her to put up with all that without fighting back on her own, seems like a bit of a stretch given her character’s basic make-up.

“Lakeview Terrace” should have been a great thriller, and many of the necessary components were in place to make it so; however, the unlikable characters, somewhat unoriginal story, and characters for that matter, diminished any chances of me truly enjoying the movie. As for the film’s director, Neil Labute, this was a better effort than his previous work, the dismal “The Wicker Man” remake, but still not a great movie, so better luck next time.

“Lakeview Terrace” is rated PG-13 for violence, language, and sexuality.