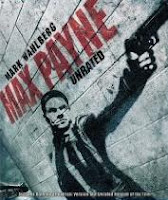 Video game film adaptations always seem to be hit-and-miss with both their quality and audience approval. For every successful entry into the genre (“Resident Evil” or “Lara Croft: Tomb Raider”) there is an equally unsuccessful one to counter it (“Doom” or “Alone in the Dark”). Continuing on in the tradition of the less than stellar entries we have Mark Wahlberg’s latest actioner, the disjointed revenge thriller “Max Payne” based upon the popular video game series of the same name.

“Max Payne” follows the revenge-laden path of the titular character (Mark Wahlberg), as he is embarking on a quest to bring to justice those responsible for the murder of his family. The further Max goes to solve the crime, the more twisted the answers he finds become, and what he discovers may just push him to the very brink.

As a fan of the two video games centering on the character’s rather violent exploits, “Max Payne” and “Max Payne 2: The Fall of Max Payne”, I was leery of how accurate the film adaptation would be to the source material. When I found out that Mark Wahlberg (“Four Brothers”) would be portraying Max, I gained a little more faith in the production, because Mark had said he wouldn’t have done it if the story didn’t have enough substance to sustain his interest; thus allowing myself to become cautiously optimistic about the end product. However, upon its release reviews of the film were less than stellar, not exactly a surprise given the type of film; but despite the criticism the movie went on to produce some decent box office numbers, leading one to wonder if perhaps the movie may be better than expected. Having now seen “Max Payne” for myself, I believe that even though it is fairly faithful to the first video game especially, the movie is such a jumbled mess that I find it hard to believe that anyone could really enjoy it.

For starters, the story is obviously attempting to be a semi-complicated mystery/whodunit, yet the actual screenplay is far too simplistic to appropriately service this style of movie. The film would have been much better served by a screenplay that devoted the proper amount of time and effort into developing the mystery rather than teasing the viewer with snippets before heading off into the next overblown action sequence. Typically in mystery movies there is always a twist somewhere along the way, generally involving a character whose motives you thought you knew, but it turned out you couldn’t have been more wrong about. Just as I suspected would be the case, “Max Payne” did its best to incorporate one such twist; however, the under-developed storyline caused the twist to be easily deduced way before it ever occurs, completely removing any kind of suspense or anticipation from the equation.

Another problem with the story is the sense that many key scenes are missing from the final film, due to characters seemingly popping up out of nowhere; yet somehow aware of what all has transpired and ready for action on whoever’s side they’ve chosen. I know that sometimes in a film the viewer is to assume certain characters have had some sort of dialogue off-screen that filled in some gaps, this is usually mentioned in passing within a scene to give the viewer a clue that this has occurred. However, in this film no such clue is given, and this assumption has to be made far too often; to the point that it quickly leads one to presume that the script, as written by first time screenwriter Beau Thorne, was so paper-thin, that no thought was ever put into actually bridging the gaps in the story or fleshing out any of the characters’ relationships along the way.

Action director John Moore (“Behind Enemy Lines”) brings a stylistic flair in the vein of “Sin City” or “The Spirit” to the film, utilizing a lot of neutral colors with splashes of bright reds and other colors here and there to accentuate the action. I did appreciate that John took a few moments within the film to incorporate the bullet-time effect into some of the action. Even though this effect has been massively over-used ever since “The Matrix” made it popular, it is a staple within the video game, so as a gamer I was glad to see its inclusion. The problem with the bullet-time effect is that when it is initially employed in the film, the context doesn’t really make a whole lot of logical sense (much like the rest of the movie), and the effect while appreciated feels wasted in the end.

Speaking of the director, I do feel it is only fair to dump some of the story’s faults onto him as well, since he would have had some say in the final cut of the movie. Perhaps, next time he should think about elaborating on some plot points instead of glossing over them to move onto the next action scene. I will say that John and/or the editor of “Max Payne” was wise enough to keep the momentum of the film moving along quickly, so as to not allow the audience a whole lot of time to realize just how weak the storyline truly was, until after they’ve finished watching it.

Mark Wahlberg was a good choice to portray the tortured soul of Max Payne. Although criticized for a lack of emotional range in the role, I felt Wahlberg played the character the exact way as he is portrayed in the video game. Plus, when a person’s family is completely wiped out, I don’t see that same person being all smiles too often; no, I believe he or she would probably be a pretty depressing person to be around. As a testament to Mark Wahlberg’s performance, even though he is fairly one-note emotionally throughout the course of the movie (there are a few instances of happiness from Max sprinkled about), he still is able to keep the viewer entertained, despite a meager script.

Supporting cast members are mostly comprised of cameo appearances within the movie, which harkens back to my complaint that characters just pop-in at random and are gone just as quickly as they appeared. A few of the cameo and/or supporting characters were played by Chris “Ludacris” Bridges (“Crash”) as a member of Internal Affairs investigating Max, Chris O’Donnell (“Batman & Robin”) as a former co-worker of Max’s late wife, and Olga Kurylenko (“007: Quantum of Solace”) as a woman who may be linked to what led to the murder of Max’s family. Truthfully, the only real supporting cast members that had more than five to ten minutes of screen time were Mila Kunis (“Forgetting Sarah Marshall”) as an assassin that assists Max occasionally while trying to find her sister’s killer, and Beau Bridges (TV’s “Stargate: Atlantis”) as a former cop and confidant of Max. Beau seems to get the lion’s share of the screen time out of all the supporting characters, and he does a good job with the stock character he is given to play; but his part in the overall scheme of things is so easily deduced that he seems wasted in the role.

Heavy on the violence, yet light on the story, “Max Payne” is one video game adaptation that knows how to bring the action of the source material to life on the big screen; but fails to deliver a story that even begins to resemble that of a good movie, let alone a decent video game. If you are a fan of the video games then you may enjoy “Max Payne”, but my guess is that you’ll wish you would have just spent the two hours playing through the story rather than simply watching it.

“Max Payne” is available in rated R and unrated editions both contain violence, language, and sexuality.