Directors and brothers, Jay and Mark Duplass, were asking each other and some friends what the scariest thing they could think of was. Someone said “a man with a paper bag over his head following you.” The group laughed at first but one of them awoke from a nightmare of that exact scenario. That’s what’s great about this movie; the concept is just so ridiculous until you actually become a part of the situation. Baghead features four thirty-something friends who go to a secluded cabin one night in order to write a film. Instead, they get distracted with jokes, alcohol, and various cases of flirting. One of the women tells of a nightmare she had of a man with a bag over his head outside of her room. Soon, this becomes real and our friends are left to fend off against the mysterious baghead in the middle of the woods. 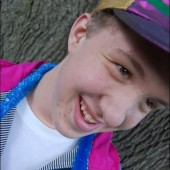 Well, my name is Ryan. I'm only sixteen years old but consider myself somewhat experienced in the world of cinema. I enjoy watching and writing about all types of film. It doesn't matter the language, decade, or genre, I'll give anything a chance. I'll admit and say that I've just started taking film reviewing seriously and some of my stuff won't be as good as a lot of others' reviews but I'm sure the more I do them, the better I'll get. I look forward to meeting a bunch of new people on here and if anyone would like to talk to me, I'd be more than willing to discuss anything whether it be my personal life or favorite films. That's all I can think of for now.