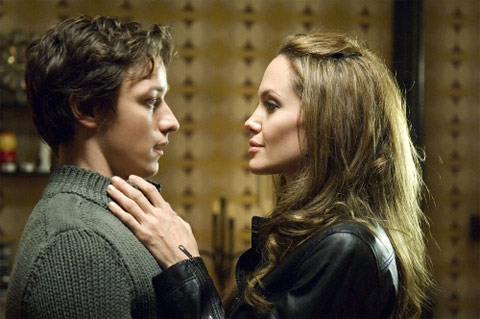 In the case of “Wanted,” the brain child of acclaimed comic book writer Mark Millar, and adapted to the big screen by Michael Brandt and Derek Haas, it is easy to see why the film is so utterly, fantastically, ridiculously bad just from the basic plot description. Which is as follows…

A frustrated office worker, Wesley Gibson (James McAvoy), suddenly learns he is the son of a man who was apart of a secret fraternity of assassins. After being dragged out of his mundane life, He is told he has inherited, ridiculous abilities like his father had, and joins the fraternity. These assassins within the fraternity take there orders from Sloan (Morgan Freeman), who takes his orders from a knitting machine…no joke, and he sends out his killers worldwide. Wesley is led to believe his father was killed by a rogue assassin and that he must hone his own hidden skills (such as bullet bending) in order to hunt his father’s killer down.

Now, as ridiculous as that all sounds, it seems even more so while watching it. It feels like the bastard step-child of “The Matrix” and “Fight Club,” with touches of other things thrown in for good measure. Mostly, it’s a popcorn movie, all of which require a certain amount of our suspension of disbelief, but this movie is ridiculous. While it gets off to a promising start, the movie begins to feel like a train wreck once Wesley begins his brutal training sequence, and then low and behold, there is a train wreck scene shortly after that. So it feels fitting in that regard.

Mixed in with the over the top, completely unbelievable action scenes, is an attempt for a higher purpose behind things. A message for us to think about, but mostly seems so sad and so forced, that it only adds to an already horrible film. While I can see many people, mostly college aged guys, enjoying this type of movie, I will stick to the films it is so tirelessly trying to emulate. All of which were much better written, and more successfully pulled off. As for this…skip it if you can.