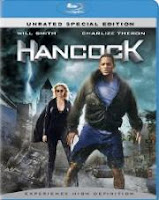 Superhero films generally do very well with me, nine times out of ten I will enjoy these types of movies, with some of them ranking amongst my favorite films of all time. With the recent superhero release of “Hancock” starring Will Smith, I wasn’t sure, when sitting down to watch it, what I was going to think about the movie. Based on all the reviews I had heard or read regarding the theatrical release, I found myself having little to no expectations for this movie. The only way I could think of for even remotely psyching myself up to see it, were two standout features for the release; one, Will Smith always delivers terrific performances, no matter the source material, and two, the unrated extended cut was to include ten extra minutes of footage not shown in theaters. However, even the critics agreed that Will Smith was engaging, even though they found the movie to be lacking. Leaving me with only one question, “Were the ten minutes of additional content enough to salvage what many felt was a disaster of a film, or was there no hope left for this superhero to cling to?”

“Hancock” follows the adventures, or should I say misadventures, of an alcoholic superhero named Hancock (Will Smith) as he goes about the business of saving lives in and around Los Angeles. The problem with Hancock is that even when he’s doing the right thing, he’s going about it all wrong, and typically he causes more harm than good. Enter publicist Ray Embrey (Jason Bateman), an idealist who, against his wife’s (Charlize Theron) possibly better judgment, attempts to turn Hancock’s life around, and transform him into the hero he should have been all along.

Unrated editions and extended cuts are words and/or labels that Hollywood likes to slap across the cover of DVD’s and Blu-ray’s in an effort to lure gullible customers (like myself, sadly) into believing the movie to be an even better version than the one they may or may not have seen in theaters. Generally, these new editions of a movie are little more than one or two extended or altered scenes that add little to no value to the overall movie. But, there are rare occasions where these unrated or extended editions actually prove to be a completely new movie experience, and many times allow for a much more improved final product than the theatrical cut. “Hancock” happens to be one of those rare occasions, because the newly added ten minutes of restored footage gives the story a much more cohesive structure, giving audiences the sense that they now have a complete movie to enjoy. As opposed to one that was chopped to bits in the editing room to appease the wishes of executives that didn’t have the film’s best interests at heart.

In a summer when superheroes reigned supreme at the box office, “Hancock” as a superhero film was sort of an oddity. On one hand he’s a super-powered hero that saves the day, when all is said and done, even if he isn’t nearly as efficient as other heroes may be. While on the other hand, he’s the antithesis of everything beyond having some super powers that makes a hero so great. It’s this dichotomy within Hancock’s character that makes this superhero movie all the more appealing to me. Sure, having some Academy Award nominees in your cast will help almost any movie, especially when they are the likes of Will Smith and Charlize Theron; but the inner conflict raging within Hancock over trying to do what’s right and saving humanity versus not caring anymore, and just drowning his sorrows, is what creates the dramatic element needed for a film such as this to succeed. I also appreciate that by taking this approach to a superhero film, writers Vincent Ngo and Vince Gilligan, have combined traditional comic book elements such as an allusion to a greater destiny, massive action sequences and great visual effects, together with some off-color, at times raunchy comedy, and even a little bit of mystery to shake up the genre.

I will admit that as fun as “Hancock” was, it’s still not a perfect film. There could have been even a little more story added in, and a few more elements could have been explained about the hero and other factors within the film; however, had too much detail been added back in, then a majority of the mystery surrounding Hancock would dissipate, which could possibly make for less interest and places to go with the inevitable sequel. Now, don’t get me wrong when I say that there could have been a little more added content, what was added back in did indeed bolster the story even further, and the movie does not appear (in my opinion) to have any gaping holes left that distract from the experience, as was the case with the theatrical cut. Although, there are still some elements within the story that did leave me curious, but these were most likely left in the movie intentionally to give some direction for where the sequel needs to go.

Will Smith (“I, Robot”) once again proves that he can overcome virtually any competition and rule the box office, not to mention he was once again the king of the 4th of July weekend. I believe “Hancock” marks his fifth movie to debut in first place at the box office over the holiday weekend, and his eighth in a row to debut at number one period. Will’s charismatic, and at times commanding, performance made even this seemingly unredeemable hero enjoyable even when he essentially hits rock bottom and has to begin his ascension to become the hero the world needs. Jason Bateman (“Juno”) provides some quick one-liners that hit the mark every time, effectively countering the darker elements within the first half of the film. Surprisingly, Ray (Jason’s character) was actually given a decent story arc throughout the movie. I suspected that because he was the PR guy that helped to get Hancock back into the public’s favor that he would slowly drop out of the story once this was achieved, but he turned out to be a central figure throughout the duration of the movie.

Lastly, Charlize Theron (“Monster”), as Ray’s wife and someone with an obvious link to or knowledge of Hancock’s past, was underused in the early portion of the movie; however, the latter half provided her character with much more development and importance, rather than being just the eye candy for the film. Her performance was strong for the most part, although she perhaps played it too overtly that something about Hancock bothered her, and her attempts to play that off were lazily handled. It is possible that this was done in such a way because of how the script called for it or it was director Peter Berg’s wishes. Whatever the case may be, I was surprised that this was how she was made to act in the early moments her character was around Hancock, and I found that it made her performance feel uneven, and her delivery even seemed a little unenthused as if she wasn’t entirely into the story early on. Once these early moments passed, Charlize quickly found her stride, and her performance greatly improved (as is expected with such a talented actress) throughout the remainder of the film. Overall, had it not been for the generally strong performances of the cast of “Hancock”, the film’s subject matter may not have worked so well with audiences, especially when compared to the other exceptional superhero films released this summer and of those past.

With heroes such as Batman, Iron Man, and The Incredible Hulk knocking out competition left and right this summer, it’s a shame that the powers that be wouldn’t allow the better version of “Hancock”, found in the unrated edition to air in theaters. Had this occurred, I believe critics would have given the movie a much warmer reception, most likely not as warm as they did for “Iron Man” or “The Dark Knight”, but without a doubt better than they did for the film’s theatrical release. Even with most critics bashing “Hancock” all over the place (to be fair there were some that did like the film), Will Smith’s magnetism with audiences still allowed him to overcome the adversity posed by negative reviews and come out on top for a week or two in one of the most competitive blockbuster summer’s in history.

“Hancock” is available in PG-13 and unrated editions; both contain violence, language, and sexuality.