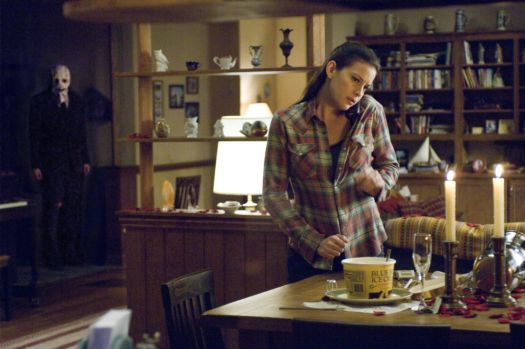 It’s been awhile since I’ve seen a movie set-up its characters so nicely, with such poignant and identifiable writing,  featuring two great young actors, and yet slowly unravel into a nearly useless film with little redeeming qualities to speak of within the final two acts. Yet, that is the case with The Strangers, Written and Directed by Bryan Bertino, and supposedly based on actual events that occured in 2005, and further continuing the rapid decline in quality horror films.

The film centers around a young couple, Kristin (Liv Tyler) and James (Scott Speedman) returning home after a wedding reception in the middle of the night. The two are barely speaking when they arrive, as Kristin has just turned down a surprise proposal from James, who has also decked out the small home in candles, flower peddles and romantic music. After the two get there space, and begin to make-up, a knock comes at the door at 4am. At the door is a strange girl, who has also loosened the house light so she remains in shadow, and who asks if another girl is there. After the girl is chased off, James leaves to clear his head, and Kristin is quickly harassed by both the same strange girl and two others, all wearing masks and making loud noises outside. James returns shortly after, and the harassement becomes violent and soon the young couple is trapped in there home and fighting for there lives.

Now, I will acknowledge on the outset here, that when the masked pranksters first begin harassing Kristin, the film manages some genuinely creepy vibes. In particular, when Kristin is in the kitchen and suddenly one of the masked baddies is standing in the background watching her is a pretty uber-creepy moment. Sadly, the noises and nonstop knocks and crashes get old quick, and the movie is reduced to two people who seem to be scaring themselves more than anything. The movie takes odd turns, such as James friend appearing in the middle of the film, only be killed off eight seconds later for no real reason other than to give the masked baddies a chance to taunt James some more.

The first act, as mentioned at the top of this review, is very well written and adheres to both of these actors strengths more. It is a subtely beautiful twenty minutes that sets up these characters and the drama they are going thru and this surprise turn in there relationship. Honestly, I forgot I was watching a horror movie and when the wierd things did start happening, I was actually upset, and thats probably why I couldn’t give this film a better grade.

However, the final insult, to me, was the final ten minute “wrap up” sequence. Without giving it away, let me just say that the masked baddies finally get both James and Kristin captured and what insues is pointless, unredeemable and stupid. If this was an actual event I would say the same thing, as pointless, stupid and horribly unredeemable things happen in the world everyday. But people don’t make movies about most of them, yet for some reason, they made a movie about this one, and it serves no purpose. While many a great horror villian has slashed and killed with no defined purpose, most of them were still enjoyable to watch on some level. This one was not. A total letdown, and waste of talent.