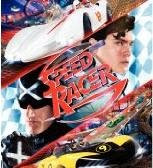 I haven’t watched all that many episodes of the popular Japanese animated series “Speed Racer”, upon which the famed writer/director team known as the Wachowski brothers based their newest movie. So, when this live-action version of the series debuted in theaters earlier in 2008, I wasn’t all that excited to see it. To me it looked cheesy, childish, and generally uninteresting; although I always thought the visual effects looked impressive, as well they should coming from the creators of “The Matrix” trilogy. With that being said, “Speed Racer” has recently arrived on DVD and Blu-ray, and I figured I’d eventually get around to watching it, mostly to see the visual effects. Suffice it to say, I did finally rent the movie, and even though I went in with very low expectations after reading all the negative reviews it received, I have to say “Speed Racer” actually wasn’t the horrible disaster of a movie that I was expecting to see.

“Speed Racer” follows an up-and-coming race car driver named Speed (Emile Hirsch), who along with the support of Mom and Pops Racer (Susan Sarandon and John Goodman), is taking the professional racing circuit by storm in his lightning quick Mach 5. However, just as Speed is beginning to make a name for himself in racing, the corruption of this world quickly tries to topple this wholesome family, and without the additional aid of his girlfriend Trixie (Christina Ricci) and the ninja-like prowess of Racer X (Matthew Fox), Speed and the entire Racer family may lose more than just the sport they love.

I know someone could make the argument that when a person goes into a movie with low expectations it wouldn’t take much for the movie to actually seem impressive to that viewer. And this is true, and I wondered if that was the case here, because I didn’t want my opinion affected by my previous bias towards the film. So, after I thought about it for a little bit, I feel I can honestly say that I actually found “Speed Racer” to be moderately enjoyable, regardless of what my initial thoughts had been. It’s not the perfect movie, not by any means, but it does provide some very entertaining and visually impressive racing sequences that have not been seen before in movies; and it was kind of nice to have a movie that was essentially safe for the entire family to watch, which is something of a rarity these days.

The screenplay written by Larry and Andy Wachowski, who also directed the movie, is for the most part very straightforward and simplistic, which is absolutely perfect for the kind of movie this is. The characters are clearly defined as to who is good and who is bad, making it easy for children to know who to root for; and the morality on display is quite obvious, but without becoming too heavy-handed as to take away from the overall story. Basically, this movie’s story is geared specifically towards kids, or those that are hardcore fans of the animated series, so all other moviegoers should just sit back, relax, and turn their brains off because for the most part you won’t really need it on.

However, approximately 75% of the way through the movie, the Wachowski’s attempt to throw in some plot twists and betrayals, causing the story to become a bit more complicated than it initially had been. The problem with complicating this movie’s story is that for most adult members of the audience who were not fans of the series, and therefore, have been able to just enjoy the movie for the piece of fluff that it is; we now have to re-engage our brains to tag along for the plot twists. When this occurs, at least in my case, it also allowed me time to begin analyzing what I had been watching, and before too long I started to notice little problems I had with various aspects of the movie. The problems I had were nothing too big to cause the movie to flop in my eyes, but merely annoyances that I had noticed when they occurred but had dismissed because the movie was still kind of fun and very fast-moving so I didn’t have a whole lot of time to dwell upon them. But, when the Wachowski’s introduced some plot twists, and attempted to throw in some drama for good measure, the movie kind of slowed down, which felt really odd being that the movie was a mere 30 minutes from conclusion; thus allowing me a moment to reflect. In my opinion, “Speed Racer” would have been a much better movie experience had the Wachowski’s simply ignored their penchant for over-complicating things, so that this movie could have remained the simple kids’ movie it started out as. Instead, it wound up being just an average movie that will most likely be forgotten over time by all who’ve seen it, when it could have been a classic for many kids to enjoy for years to come.

The cast of “Speed Racer” is a decent ensemble line-up with rising star Emile Hirsch (“The Girl Next Door”) in the lead as Speed. Emile does a good job of making this two-dimensional cartoon character feel just a little bit more real to the audience. His performance is nothing stellar, but neither is anyone else’s in this movie. I find it strange that for all the over-complicating the Wachowski’s tried to do with this movie, they could have at least thrown in a little bit of character development for the actors and actresses to dig into. Is that too much to ask? I guess so. Alongside Emile we have veteran actors John Goodman (“Death Sentence”) and Susan Sarandon (“The Client”) as Speed’s parents. Both give good performances, although I thought Susan was maybe phoning it in a little bit in places. Rounding out the cast we have Christina Ricci (“Sleepy Hollow”) and Matthew Fox (“We Are Marshall”). Christina portrays Speed’s girlfriend Trixie, a role that could probably be called her most sweet and innocent to date. Typically, Christina plays much more complicated or troubled characters, but she handled the uncomplicated and uncompromising Trixie surprisingly well, even to the point of being cute in a few instances. Matthew Fox as the mysterious Racer X was probably given the least to do out of the entire cast, but I imagine he signed on to this movie for the same reason as all the other members of the cast, a chance to work with the creators of “The Matrix”. I mean, seriously who’s going to pass up an opportunity like that? Even though Matthew wasn’t given much more to do than just fight as Racer X, it was clear in the little screen time that he did have that he was obviously having a good time.

From a visual effects standpoint, “Speed Racer” is one of the most mind-blowing experiences you can have at the movies. Almost every single special effect is amazing, as the Wachowski’s create their hyper-reality or whatever you would call the world of this movie. As awesome as most of the special effects were, there were a few moments I found to be weak spots, and I don’t know if this was intentional or not. One particular moment dealt with a chase sequence involving a semi truck that seemed unfinished and looked far too fake, even for this kind of movie. The other complaint I had regarding the visual effects, and I know this one was intentional, was when the characters would be viewed from the side for a kind of side-scrolling action sequence; which I presume was meant to resemble the classic anime of the animated series. To me these few moments were utterly pointless and felt out of place in a movie with essentially top-notch visual effects. I’m sure some of the fans of the series loved these moments, but they weren’t for me and I wish they would have been left out of the film.

Overall, “Speed Racer” is a fairly entertaining movie, it’s not the best thing you’ll ever watch, nor does it strive to be. Even so, it will provide you with a two hour escape from the real world, and some good old fashioned family fun that is at least worth seeing once, but probably not much more than that.

“Speed Racer” is rated PG for violence and brief language.