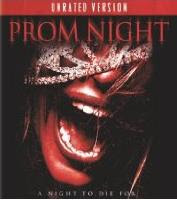 28 years ago a fairly successful horror movie was released starring the then-reigning scream queen, Jamie Lee Curtis (“Halloween”), and dealt with teenagers being murdered on what should be one of the happiest nights of their lives, Prom Night. Fast-forward to 2008, and director Nelson McCormick (TV’s “Prison Break”) and writer J.S. Cardone (“The Covenant”) have attempted to serve up another dose of mayhem and murder surrounding that festive evening with a loosely-inspired remake of the 1980 slasher film of the same name, the appropriately titled “Prom Night”.

“Prom Night” is the story, as you may have guessed by the title, of a group of teenage friends attending their high school prom, except what should be a night of fond memories, will end up becoming a night of horrifying nightmares for those that survive. Three years ago, Donna (Brittany Snow), a popular girl in the school, lost her entire family to a killer obsessed with being with her. Now, on the night she has waited for throughout her entire high school life, the killer returns to finish what he started.

I will admit that I have only seen bits and pieces of the original “Prom Night” that starred Jamie Lee Curtis and Leslie Nielsen, and what I’ve seen appeared to be fairly predictable, as most horror films in the 80’s tended to be. So, I’m pretty confident I could surmise what happened in the end without ever finishing the movie. With this 2008 incarnation that has been dubbed a remake by most viewers, albeit an extremely loose one at that, the same predictability of the original continues to exist even in today’s incarnation and the movie definitely does not benefit from it. “Prom Night” begins with a very brutal opening sequence that definitely catches the audience by surprise. When watching this surprising opening portion of the movie, you are given this false sense that perhaps you are going to be watching a horror film that is in the vein of the slashers of the 80’s; except that this is one that actually knows how to send thrills and chills through you. However, after that initial sequence ends you quickly begin to realize that this movie is going to fall extremely short of the expectations that its opening had set you up with.

I was intrigued by the story at first, not just because of the opening sequence, but because writer J.S. Cardone had actually created an extremely creepy villain (Johnathon Schaech) that was not supernatural as many of the villains in the traditional horror films have been. This villain is one that may actually exist somewhere in the world, and that is a very frightening prospect when you stop to think about it. Even though the killer was much more believable than most within horror films, the movie quickly loses itself amongst numerous horror movie clichés, insipid dialogue, and an undeniably heavy dose of plot holes and continuity errors; not to mention the fact that the movie unfolds in such a predictable fashion that it simply boggles the mind that any writer would even bother submitting this as a finished screenplay.

The biggest problem that I had with “Prom Night” was the numerous plot holes and continuity errors that plagued the film. Many movies have these problems, sometimes you can ignore them, but there are times when they occur so frequently that it becomes flat-out distracting and there’s just no denying their existence. “Prom Night” falls into the category of a movie with so many plot holes/errors that there isn’t enough substance left over to make the movie work in any logical sense. One of the main sources of the problem was the fact that whenever the killer murders someone (and this isn’t really spoiling anything, because everyone has figured out by now that murders occur in horror films), he somehow is able to move their body without making any noise when someone may be in the other room, and also without leaving any kind of bloody trail or blood stain of any kind. Yeah right, give me a break.

Leading the cast of mostly unknown teenagers, many of which I doubt will have all that lengthy of a career in Hollywood, was the surprisingly talented actress Brittany Snow (“Hairspray”). Brittany easily carried this film on her own, and her likeability and talent as an actress made the movie at least bearable, but one can’t help but wonder why a young actress as talented as she bothers to debase herself by coming within ten feet of this garbage. The only reason I can figure is that Brittany most likely viewed this as an opportunity to expand her fan base by gaining the exposure amongst teenagers that a horror film can provide; however, there have got to be better choices out there than something this ridiculous and uninspired.

The rest of the teenage cast, or at least those pretending to be that young, was a mixture of those that were moderately talented individuals, to those that shouldn’t expect much more work to come their way later. Many members of the cast fell into the latter category. The only other good performance in the movie, aside from Brittany Snow’s, would be from Johnathon Schaech as the film’s creepy villain. Although Johnathon created an interesting and realistic villain, whoever made the decision to have him walk slower than a snail during the killing sequences really should have taken a few more moments to think that through. In most horror movies, especially those of the “Halloween” or “Friday the 13th” variety, the killer tends to walk unbelievably slow for someone trying to make a killing; however, as slow as those killers walk, their victims normally stop to hide/catch their breath which allows the killer to catch them. With “Prom Night” the killer walks slower than Jason or Michael Myers ever did, and his victims rarely stop running away; yet somehow he manages to catch them every time and to me that is a problem for believability in a movie that is already pushing the limits in that area to begin with.

With too many problems that plague the entire movie, “Prom Night” fails to deliver any sort of thrills or chills to the audience; mostly because the audience is too busy laughing at how stupid everything and everyone is within this movie. I must point out that the filmmaker, Nelson McCormick, was smart enough to determine that his movie had far too many problems; so he kept the movie’s pace going along at a very fast rate. This was done so the audience would hardly have any time to notice all of the little inconsistencies or impossibilities that kept occurring throughout his pale imitation of a horror thriller.

“Prom Night” is available in PG-13 and unrated editions both contain violence, language, and sensuality.