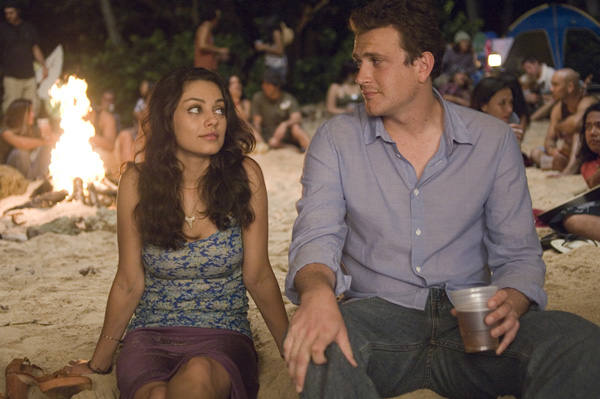 From the Judd Apatow studio, the same which brought us The 40-Year Old Virgin, Knocked-Up, and Pineapple Express, comes an often boring, occassionally charming dramedy about a man who travels to Hawaii after being dumped by his T.V. star girlfriend, only to run into her and her new boyfriend on the island.

Peter Bretter (Jason Segal) has a bad couple of weeks. First, he is dumped by his gorgeous T.V. star girlfriend, Sarah Marshall (Kristen Bell), then he falls into the trap of meaningless sexual encounters, one after the other, and finally when he decides to get away from it all, he runs into his ex and her new lover (Russell Brand) on the island of Hawaii. Seemingly doomed to his own oversensitivity, and unhappiness, Peter is shown several acts of kindness by the Hotel front desk clerk, Rachel (Mila Kunis), and soon the two begin spending time together. Crazy ex Sarah becomes jealous, and soon Peter has to choose between the girl who broke his heart, and the one who helped put it back together.

The overly done theme of “moving on” after a hard break-up has been at the center of countless romantic dramedies, and that is the major crutch against this film from the very start. While its young, hip, “T.V. reunion” style cast all do very well in the movie, the film still is just a rehash on many old ideas in other films. Sometimes the Apatow films put an unexpectedly sweet and adorable spin on these old ideas, and sometimes they put a vulgar spin, and in this film, they do both repeatedly. The film never felt very cohesive to me. I love the actors (especially Kristen Bell and Mila Kunis, both of whom look amazing in this film), connected with them, but the story just seemed so boring and overdone.

Another device, used very well in 40-year old Virgin, but not quite as well here, is the overly sensitive male lead. Jason Segal does a good job with it, but like the script itself, he seems to get pulled in too many directions, too much time is spent watching him sob (not to mention way too much frontal male nudity), and the conclusion of his break-up plot with Sarah Marshall seemed too rushed, too convienient and too hollywood. The film took forever to get going, and once it did become somewhat enjoyable, it was because of Peters new relationship with adorable Rachel, and just when that relationship gets going, the film kinda copped out.

I’m also sick of seeing the same cast of losers in each of Apatows films. I don’t think I’ve enjoyed Jonah Hill for one second in anything since Knocked-Up, and even in that film, he was overdone. And while it was fitting to see Paul Rudd in a middle-aged loser role, he is also becoming overdone and annoying. I’m all for loyalty, but Apatows film don’t connect in the same way as, say, Kevin Smith’s “View Askew Universe” does. Seeing the same actors is mostly confusing and distracting in such a subpar film like this one.

Forgetting Sarah Marshall is a lot better than both Super-Bad, and this summer’s highly overrated Pineapple Express, but its still a film with many problems. It does have enjoyable scenes, funny moments, and a great cast, but sadly the pieces are better than the whole here, and the film ultimately was kinda disappointing.