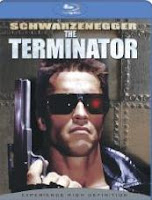 With the new television season in full swing I find myself bombarded with a plethora of new shows vying for my attention, few will actually succeed in gaining it in the end; however, as many new shows try to become new favorites of mine, I still remain loyal to the ones I’ve enjoyed from previous seasons. One such show that became a favorite of mine last season was the Fox network’s mid-season replacement “Terminator: The Sarah Connor Chronicles”. Now that the new season of this show has gone on for a few episodes, I recently found myself wanting to re-watch the original movies that spawned this entertaining weekly sci-fi series. So, I got out my Blu-ray copies of the Terminator trilogy and had myself a thrilling, action-packed, sci-fi weekend of machines bent on destroying humanity.

“The Terminator” is set in the year 1984 where a young woman named Sarah Connor (Linda Hamilton) is trying to make a life for herself; however, that life may soon be cut short as a deadly cyborg, called a Terminator (Arnold Schwarzenegger), arrives from the future to kill her. As it turns out, Sarah is to eventually give birth to a boy who will one day grow up to become humanity’s last great hope for survival against the onslaught of these seemingly unstoppable killing machines. Now, Sarah is in a desperate struggle for survival for not only her own life and that of her unborn child, but also for the future of all mankind.

Science-fiction movies when done well can be extremely entertaining pieces of cinema that on occasion become important facets of our popular culture. Prior to 1984, the Star Wars and Star Trek movies were the two biggest science-fiction franchises ever to be made. That is, until a little known director named James Cameron released a movie starring a former Austrian body builder that would become the first true blockbuster for both men’s careers, and cement Arnold Schwarzenegger as a cinematic icon, causing his character to become one of the most quoted and recognizable characters of all time.

The story for “The Terminator” is a blend of both present day (well, back when 1984 was present day) reality with that of a dark, bleak future where humanity’s days could very well be numbered. The concept of having a cybernetic killer come back from the future to end the life of an innocent woman and her as yet unborn child was an intriguing one. It was made even more intriguing by the introduction of her protector (Michael Biehn) who was sent back in time by Sarah’s very own son to protect his mother and prevent the Terminator from succeeding in its mission. Talk about a mind-bending storyline. An interesting element within this movie is that the future may not be set in stone, which introduces some really interesting consequences into the story depending on what happens; therefore making the movie feel a bit more unpredictable and original than one might expect from the genre. It was nice to see that even back in 1984, long before the recent crop of sci-fi/superhero films set against a realistic, modern day backdrop, writer/director James Cameron was smart enough to create a fairly realistic world for his characters and his far fetched idea (although it doesn’t seem nearly as far fetched with today’s technology) to exist within. Thus, allowing us in the audience an easier time of relating to these characters who find themselves in this bizarre situation.

Leading the cast for “The Terminator” we have Arnold Schwarzenegger, who found great success as one of Hollywood’s new action heroes in films such as, “Predator”, “Commando”, and “Total Recall”, and all of it was due to his star making performance in this movie. The fact that Arnold became such a big star from this movie is actually somewhat surprising to me given the fact that he barely speaks in his role, shows zero emotional range (which is appropriate given that his character is a cyborg), and isn’t exactly challenged in a physical way either. Regardless of all of this, Arnold still managed to create a villain that instills fear by being this ultimate killing machine, not to mention the eerie way in which he systematically scans a room is perfectly robotic and creepy at the same time. All the while you’ll find yourself wondering is this possibly the future of our machines with the way A.I. is becoming more and more advanced these days. Just a little bit strange to think about, isn’t it.

The supporting cast led by Linda Hamilton and Michael Biehn was surprisingly solid, providing intriguing characters that were easily accessible, allowing for us to quickly begin rooting for their survival and ultimate success against the onslaught of the Terminator. Linda Hamilton (“Dante’s Peak”) was given the most to do out of everyone within the cast. Over the course of this movie we see her character run through a wide range of emotions; from happiness to fear, from fear to surprising romantic bliss to an eventual undeterred resolve. Linda proved in this movie that she was definitely star material, by creating such a three-dimensional character that began the movie as a virtual nobody and ended it poised to become this virtual warrior-like woman determined to raise her son to be the one man that could save humankind from extinction. Along with Linda, actor Michael Biehn (“Aliens”) created a very human, yet at times almost superhuman hero in Sarah’s protector, Kyle Reese. His devotion to not only his mission, but also to Sarah, was a nice twist to the character, because it made him into a much more realistic hero. Normally in movies like this the hero is one that knows exactly what to do in every situation, and nine times out of ten Kyle was very much like that, but there were those moments where he clearly was flying by the seat of his pants, and just hoping for some miracle to occur to save both him and Sarah from the machine hunting them; it was this very human aspect to his heroic character that made him stand out more than what your typical action hero would have in any other movie.

Lastly, writer/director James Cameron did an excellent job of creating a visually thrilling science fiction experience with a significantly smaller budget than anything produced in movies or television today, and yet still his visuals hold up better than most from that time. That is as much to do with the excellent work on behalf of James Cameron and his crew as it is with the talented people working with Stan Winston to create the stunning, yet sometimes frightening images of a future where machines rule over the humans with an iron fist. Granted there are moments within the film where it definitely shows its age, and the practical and visual effects definitely look dated; however, given the time at which the film was made the results are still impressive even by today’s standards if you really stop to think about it. It would be nice (and I’m sure purists will disagree with me on this) if some of the weaker moments in the visual effects area could be tweaked/redone similar to what George Lucas did to his original Star Wars trilogy. I’m not saying to tweak the effects to the extent that George did, but there are definitely places where if an improvement could be made the movie would definitely benefit from it, and would feel more in line with the technological advancements made in between this first movie and its sequels.

Overall, “The Terminator” is an excellent science fiction thrill ride that grabs you early on, and only occasionally slows down long enough for you to catch your breath before quickly rushing forward once more. With an outstanding story, a surprising cast, and mostly solid visual effects work, this is a movie that kicked off one of the greatest sci-fi movie series’ of all time, and should definitely be on everyone’s must see list!

“The Terminator” is rated R for violence, language, and nudity/sexuality.