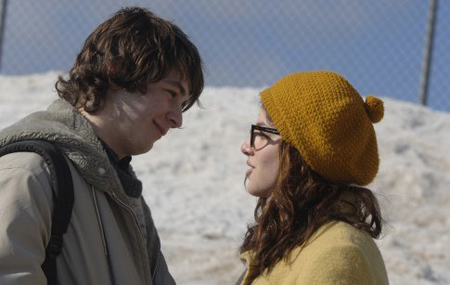 Written and Directed by David Gordon Green, and Based on the novel by Stewart O’Tan, Snow Angels is a brutally tragic drama which intertwines the lives in a small town. Focused on a high school teen (Michael Angarano), his former baby-sitter (Kate Beckinsale) and her emotionally unstable husband (Sam Rockwell) and there young daughter (Gracie Hudson). Heartbreaking, intelligent, tragic and very powerful, the film packs a subtle punch and will leave you thinking about it for days after watching it.

In the opening frames, Director Green geniusly paints the picture of anywhere U.S.A. in a small Pennsylvania town in the mid 1970s. We see images that depict everyday life and we realize the film could take place where we live. During a high school band practice, we hear two distant gun-shots, as everyone looks around wondering where it came from. From this moment on, we know the film doesn’t have a happy ending, as it cuts back weeks earlier, and introduces us to the main characters.

Effectively, and surprisingly, the film focuses on young Arthur (Angarano), and puts him in the middle of everything going on in the movie. The film focuses on his friendship- turned blossoming romance- with geeky new girl Lyla (Olivia Thirlby), and each time they are on screen together, we are allowed to forget about the horrible things going on in this small town. There chemistry is wonderful, and there storyline of young love is incredibly sweet, and adorably cute. As they go from awkward friends, to dating and eventually making love for the first time, it is a pleasant distraction from the awfulness within the rest of the movie.

That awfulness centers around Arthur’s former babysitter, and current co-worker, Annie (Beckinsale) and her estranged emotionally unstable husband, Glenn (Rockwell). The two of them are seperated and going thru incredibly rough, unstable times, even as Glenn comes by to spend time with there daughter, Tara. Annie is essentially at her wits end in the beginning of the film. Her seperation from Glenn, and his apparent attempts at suicide have left her exhausted both mentally and physically. She is having an affair with Nate (Nicky Katt), her best friends (Amy Sedaris) husband, and is also struggling to support her aging mother. Kate Beckinsale plays Annie flawlessly, even when her own actions lead to tragedy about half-way thru the film.

Sam Rockwell plays emotional train-wreck Glenn every bit as flawlesly, never overdoing the born-again Christian, and somehow enduring himself to the audience, even though he is an unstable drunk. Glenn is trying, in his unsuccesful way, to get his life back on track and win Annie back. When he gets a job and asks her out to dinner, Annie is all business, hurrying the dinner along and even ridiculing Glenn for his job selection as a carpet salesman. Again, Glenn is a holy despicable character on the surface, but through the actions of Annie, her affair and the tragic turn in the middle of the film, Glenn actually becomes the sympathetic character in the film, and one of the better ones onscreen in ages. Rockwell’s performance is the nothing short of breathtaking in the movie, and is the true reason we feel so deeply for Glenn’s abusive, hypocritical drunk.

The film, let me be clear, is not a happy film, it is incredibly horrific what happens to these characters, and is not often easy to watch. However, it is one of the most rewarding film experiences in quite some time. The writing, and directing of David Gordon Green is top notch, and fleshes these characters out very well. His constant reminders that this is a small town, and these are normal people is what makes it all the worse while watching it, but also what makes it that much more powerful and amazing. The attention in building up these characters is what makes us want to watch the film, even as we begin to realize the dark turns it will take. We don’t like whats happening at all, nor should we, but we feel so deeply for these incredibly realized characters, that we can’t look away. Also, the setting of the film during winter never allows us to feel very comfortable either, and only adds to the feeling of uneasiness.

The film is also many different things, which makes it so hard to describe or catagorize. A tragedy, A story about a small town, a tale of young love, seperation, and the prices people pay for the smallest mistakes. The film also seems to have a universal theme of longing between the characters. Annie gives up on Glenn and turns to Nate for comfort, who once things get crazy, turns to yet another girl. Glenn wants Annie and Tara back in his life, and when that is taken away from him, he turns for the worse. Arthur’s parents briefly seperate and then end up longing for one another more by films end. And even young Arthur and Lyla reach out for one another as all this craziness happens around them and this small American town.

A deeply personal, unflinching tale of small town tragedy, expertly crafted and pulled off by one of hollywoods most accomplish Directors. A very real life type of movie, filled with both tender, enduring moments of young love and humor, and also heartbreaking sadness and incredible anger and rage. Snow Angels in unlike most movies in recent memory, in that it doesn’t shy away from its subject matter, rather it displays it there for all to see, filled with an awful, quiet desperation for normalcy within horrific circumstances.

**One note of small confussion I had was that it is set in the 1970s, yet there are modern appliances like computers, cell phones and TVs, and also modern food containers and Mountain Dew cans in the film as well. A goofy continuity error in an otherwise expertly crafted GEM of a movie.**