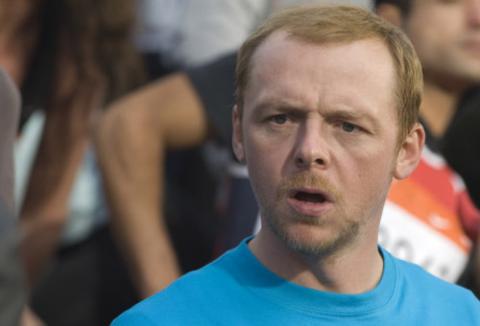 Five years after leaving his pregnant ex, Libby (Thandie Newton), at the altar, out of shape loser Dennis (Simon Pegg) decides to join a marathon to try and win her back from her new rich, smart and athletic boyfriend (Hank Azaria), also running the same marathon.

Out of shape, poor, and down on his luck, Dennis still holds the admiration of his young son (Matthew Fenton), and fears losing him to Libby’s new boyfriend, Whit. Also adding to his woes is his lack of direction in life, and his consistent inability to pay his rent. Now on track, and deciding to run, Dennis hopes its the big turn around he’s been waiting for. Helping him train, is his best friend Gordon (Dylan Moran), who is also Libby’s cousin. All seems to be going well for Dennis until Whit proposes to Libby, throwing Dennis’ world into upheaval, and making him doubt weither or not he should still run the marathon, and making him doubt himself as well.

Making his directorial debut on Run, Fatboy, Run is one David Schwimmer of Friends acclaim. Schwimmer does a respectable job behind the camera, if it was a television show anyways, and the writing of Michael Ian Black and Pegg is usually boring, rarely funny and hardly ever charming, and also sometimes becomes overly cliche. The film is dreadfully predictable, occassionally boring, and seems to drag on longer than necessary. A surprising feat when you consider the film is only 95 minutes to begin with. The great ensemble cast is mostly wasted between rare funny moments, and the even rarer charming ones.

Simon Pegg, whom I love in more straightforward comedies like Hot Fuzz, and Shaun of the Dead, doesn’t quite pull off the more romantic comedy moments of the film. He does pull off the lovable loser moments, and manages to occassionally endear himself to the viewer. That is impressive, I guess, in that his character is a complete and total loser. Unfortunately the film is just too slow, boring, predicatable and well…cliche, to be a fun film. The film is uninteresting, despite its cast, and it never really mattered to me how it ended, who won the girl, or who did what.

Schwimmer does his best to frame the endless conversations with his fine actors, and they do talk about things that seem to matter to them, but never to us as an audience. A veteran of sitcom television, Schwimmer appears to try every “sitcom of the week” trick he can to try and make boring events more interesting, but fails miserably at all turns. One can sometimes find themselves waiting for the TV laugh track to kick in, as we sit back wondering why we aren’t laughing at the incredibly horrendous comedy before our eyes.

Perhaps the films biggest problem is getting started. In the opening frames, Dennis leaves Libby at the altar and then the film cuts to an out of shape Dennis chasing down a shoplifter, while wearing a snug security guard outfit. We see him forget his keys at least four times in the first hour of the film, and we even see him try to buy tickets from an undercover policemen for his sons “Hobbit Musical.” Yeah. You read that right. Finally, about 45 minutes into the movie, the marathon plot enters into things and the film finally becomes about something. A ridiculous, boring something, but its more than we get for the first 45 minutes of Schwimmer trying to frame things in meaningful ways, almost as if he really thought he was directing something more important.

Honestly, it reminds me of the really bad years on Friends. You know the ones. Somewhere in the middle, when it become about things like Phoebe having her brothers five hundred babies, or Ross getting divorced for the millionth time. The bad middle years, something like seasons 5-7, when the show lost itself, yet always seemed to try and make people care about what was going on, regardless of how stupid it is. Schwimmer hopefully doesn’t believe he did well by this film, and I have to imagine that neither do anyone in the hollywood producing community, and one can hope this is the last meaningless comedy we see from the likes of him for a long, long time.