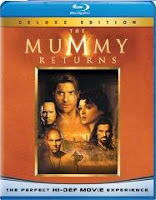 With the success of “The Mummy”, Universal Pictures was quick to put director Stephen Sommers once again back behind the camera for yet another installment. Universal was wise enough to realize that success of the sequel would most likely hinge upon the original cast returning, a story that was bigger and better, and of course a heftier budget with which to create the visual effects that should surpass those in the original, which were impressive enough. Even with all of those components in place, a success is never a guarantee, because one essential piece to the puzzle is now missing due to the fact that this movie is a sequel, and that piece is originality and/or surprise. With the first movie Universal was able to catch audiences by surprise with the humor, adventure, and visually stunning CGI; however, with a sequel people arrive with a preconceived notion for what they expect to see which could end up hurting the movie’s appeal.

“The Mummy Returns” takes place approximately 10 years after the events of “The Mummy”. Rick O’Connell (Brendan Fraser) and Evelyn (Rachel Weisz) are now married and have a young son named Alex. After a contrived series of events leads to the resurrection of the dreaded Imhotep (Arnold Vosloo) in London, Rick and Evelyn find themselves once more in a fight against an army of mummies and the fate of the world on their shoulders. As if Imhotep once again walking the Earth determined to fulfill his quest for immortality wasn’t enough to contend with; another force is threatening to be loosed upon the world. This force of darkness is one born out of the darkest rituals of ancient Egyptian mysticism, and is even more powerful than Imhotep; he is the mighty Scorpion King (Dwayne “The Rock” Johnson).

With a bigger budget, original cast members, and the same director behind the camera “The Mummy Returns” had the potential to be just as good, if not better than its predecessor. However, as good as this movie was, it didn’t quite make the connection that the first one made with at least this particular audience member. Sure, it’s a fairly solid effort for a sequel, the humor and adventure is still in place, and the action sequences and visual effects attempt to be on a much grander scale; but, the story doesn’t feel as fresh to me, and at times it seemed that the big moments in the movie were hampered by the focus being shifted too much on Rick and Evelyn’s son Alex, who was an annoying addition to the film, and one that I wish hadn’t been included in the final product.

The story for “The Mummy Returns” as written by director Stephen Sommers is fairly fast-paced, but after awhile I felt the numerous flashbacks became irritating and distracting. The reason for this is that the flashbacks seemed to be rewriting numerous elements of the first movie, and in places seemed to cause the first movie to seem somewhat irrelevant. The inclusion of a certain character’s previous life being intertwined with that of Imhotep’s and Anck-Su-Namun’s felt out of place and didn’t explain why Imhotep didn’t recognize this character in the first movie; therefore, making the first one seem inconsistent with the storyline established in this movie. Other than that problem, and the even bigger one I mentioned above regarding Rick and Evelyn’s son Alex being too heavily focused upon, the story was a good follow-up to 1999’s “The Mummy”.

The cast mostly consisted of familiar faces from the original movie, all of which seemed to still be enjoying their roles as much as the first time. I still have to say that it is a bit disappointing whenever Imhotep takes on his human form instead of the CGI created mummy form. The addition of child actor Freddie Boath as Alex O’Connell was a mistake in my opinion; I personally felt the movie would have greatly benefited from the lack of the stereotypical mischief child with a heart of gold and an intellect far beyond his years, it is just too unbelievable. Dwayne Johnson makes his movie debut in the opening sequences of this film, and within the few short minutes his character is onscreen, I was instantly intrigued by this mysterious Scorpion King, and the lack of backstory only heightened the interest I had for this new character that I hoped could be explored further in later installments. As a matter of fact my hope was realized when the spin-off “The Scorpion King” was released to theaters; however, that movie was only average and didn’t quite grab me as I had hoped it would, and the character of the Scorpion King wasn’t nearly as interesting as I was led to believe in this movie.

Surprisingly, the element that was so eye-popping in the first movie is not quite as impressive this second time around. For some reason, the CGI appears to be all over the board in terms of quality and realism. There are moments where the CGI is unbelievable, but others look rushed and extremely fake that it’s surprising that Stephen Sommers allowed the movie to be released in such a state. I had read at one time that the effects were rushed to meet the deadline of the movie’s release, which would account for the inconsistent quality of the CGI. Whatever the case may be, this was just another aspect of the movie that should have been much better and by all accounts should have blown audiences away, but in the end left them slightly underwhelmed.

Overall, “The Mummy Returns” is a fairly solid, if not flawed sequel that doesn’t live up to its predecessor. I was pleased to see the original cast return for this film, but the addition of an annoying child, inconsistent visual effects, and a story that is good but not great causes this movie to be deemed as slightly above average when compared to the much stronger effort that preceded it.

“The Mummy Returns” is rated PG-13 for violence, brief language, and sensuality.