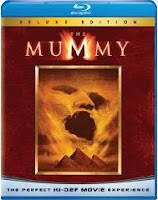 In the late nineties, Universal Pictures decided it was time to dust off one of their famous monsters of old, and give it a face-lift in order to hopefully deliver all-new thrills and chills to a new generation of moviegoers. To accomplish this, Universal chose a seemingly obscure director, to most audiences, by the name of Stephen Sommers (“Deep Rising”) to rejuvenate their classic monster, the mummy. So, with a not-so well known director, a fairly hefty budget, and a moderately well-known star in Brendan Fraser; Universal was prepared to place quite a lot of faith and clout behind their remake of “The Mummy”. But one problem still remains with this remake, can it possibly impress the older generation that grew up on the original, and can it muster enough thrills for the newer, more jaded generation?

“The Mummy” is the story of a 3,000 year old force of terror being unleashed upon Egypt. The force of nature, or the creature (Arnold Vosloo) as he is commonly known, is a former Egyptian priest named Imhotep, who betrayed his pharaoh when he struck up an affair with the pharoah’s wife. As punishment both Imhotep and his love were placed in a cursed tomb where they would forever remain. That is until a team of explorers lead by Rick (Brendan Fraser) and Evelyn (Rachel Weisz) accidentally release the monster and his wrath upon an unsuspecting Egypt.

Though expectations for “The Mummy” were decent, there was still plenty of skepticism surrounding the possible success of this remake. Earlier I posed the question that was present in many people’s minds in regards to this film, “Could this remake even hope to equal the original film and impress both old and new generations of moviegoers?” The answer is a resounding yes for both. Based on huge box office numbers and critical praise, it was clear that Universal’s gamble to resurrect their classic movie monster was not a mistake after all.

With the success of the film, actors Brendan Fraser (“Blast From the Past”) and Rachel Weisz (“The Fountain”) became very well-known amongst many movie audiences. Any praise or attention these two actors garnered from their respective roles were well earned, as both did excellent jobs bringing these tomb raiding adventurers to life on the big screen. Along with Brendan and Rachel, actor Arnold Vosloo (TV’s “24”) was great as the former high priest turned mummy, Imhotep. Arnold was clearly having fun as the vengeful creature and seemed to be reveling in all the chaos his character was bringing about; however, I must admit it was kind of a downer for me once his character became fully human in appearance, because ILM had done such a good job with the visual effects of bringing Imhotep to life in mummy form that he just wasn’t as thrilling as flesh and blood. Actor John Hannah provided many much needed moments of levity as Evelyn’s trouble-making brother, Jonathan. John’s presence in this movie could have been annoying, but writer/director Stephen Sommers was wise enough to not go overboard with the broad brand of comedy John’s character delivered.

The two lead actors weren’t the only ones benefiting from the huge success of “The Mummy”. Director Stephen Sommers showed off his knack for special effects extravaganzas, and found himself at the helm of a possible new franchise for Universal. Not exactly a bad way to boost a career. Sommers proved himself to not only be a capable director, but also as a writer who knew how to capture the essence of classic archetypal characters and make them fresh for a new generation, without losing their appeal for the previous ones. The story Sommers crafted was full of extravagant visual effects sequences that would push the boundaries of what the wizards at ILM were capable of, along with some romance, some humor (somewhat campy humor at times), and a plethora of action to keep the adrenaline pumping from start to finish. In the end, Stephen Sommers provided audiences with an entertaining movie experience that reignited a character and franchise that was abandoned long ago.

Alongside the live actors in the film, the creative wizards at George Lucas’ Industrial Light & Magic were given the daunting task of creating a realistic-looking CGI mummy. No small task by any means, yet the creative team pulled it off surprisingly well; although the creature doesn’t look nearly as perfect now as I thought it used to, especially when compared to today’s visual effects capabilities. That being said, back in 1999 ILM truly outdid themselves with the work they put onscreen, and if not for them this new iteration of the classic monster wouldn’t have been nearly as enthralling.

For a remake of a classic movie, which has become an all too common theme in Hollywood these days, Universal Pictures was fortunate enough to avoid the pitfalls of many remakes; the fact that most can’t even come close to matching the original in any way, shape, or form. Clearly “The Mummy” is the exception to what has long been the rule.

“The Mummy” is rated PG-13 for violence, language, and brief sensuality.