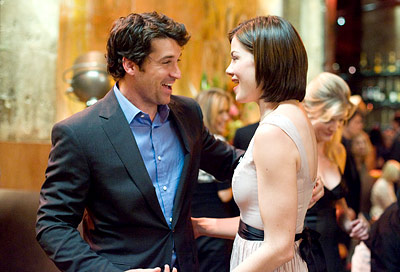 For years Tom (Patrick Dempsey) and Hannah (Michelle Monaghan) have been close, unseperable and completely platonic friends. Tom is a perpetual womanizer and commita-phobe, forcing his many conquests to adhere to countless rules designed to keep women at a distance, and ultimately chase them away. By his side to hear all his stories, and pick up the pieces, is Hannah. Hannah is a sensitive art restorer who first wrote Tom off after there off kilter introduction at college 10 years earlier. Still, Tom and Hannah survive as close friends, but Hannah holds hidden feelings that begin to fade the older they get.

After Hannah goes to Scotland for her job for six weeks, Tom begins to realize how much she means to him in her absense. He convinces himself he has feelings for her, and begins to change his womanizing ways. He decides to tell Hannah the truth when she comes back to New York, but is caught off guard when Hannah returns from overseas with her new fiancee, Colin (Kevin McKidd), a dashing duke who rescued Hannah during a thunderstorm and swept her off her feet. In addition to this devastating turn of events, Hannah then asks Tom to stand in as her maid of honor, a task he accepts, only to try and get closer to her and reveal his true feelings. Directed by Paul Weiland, and written by Adam Sztykiel, Deborah Kaplan, and Harry Elfont.

Blatantly a male twist on My Best Friends Wedding, the film plays out predicatably and with rare moments of unique humor or genuine emotion. While the plotline of Tom suddenly realizing his platonic feelings for Hannah are something deeper is often touching and identifiable, the plot is none the less cliche and recycled from many Hollywood romantic comedies. The script is filled with moments you can see coming miles away, and with moments that are remarkably awful as well. When Hannah asks Tom advice on her vows, for example, and Tom chooses that moment to profess his feelings, only to have Hannah interpret it as the advice she asked for, is extremly cheesy and takes any of the intended sentiment away from the moment.

The mix of actors is also oddly chosen. Patrick Dempsey just seems poorly casted in the womanizing, devoid of emotion or attachment, machovinist male. Michelle Monaghan does pull off her character well, but isn’t given alot of time to develop her character. Much of her story takes place offscreen in Scotland and is told secondhand. The chemistry between Dempsey and Monaghan is, at times, good, but not great, which hurts the emotional connection of the audience. They manage to pull off the roles of platonic friends well, but when it turns to more emotional and romantic plotlines, they never connect in the way you would want two people in a romantic comedy to do so.

An often boring, frequently cliche romantic comedy with nearly nothing new to say, Made of Honor is nothing special and hardly worth the time to watch. The only interesting thing is the idea, at least in my interpretation, that Dempsey is actually the villian, or at least his own villian. His selfishness and lack of self-respect sabotage every relationship he’s ever had and every attempt he makes to convince Hannah of his true feelings. The real journey of the film is Tom’s self discovery, and the realization of that is the key to winning Hannah over. In true cliche romantic comedy fashion, once Tom realizes that, Hannah does too and they live happily ever after…as if we didn’t know they would from the opening frames.

If you don’t mind a recycled and rehashed romantic comedy, than the movie may be enjoyable. For the rest of us, the film is mostly a let down.

Rated: Dr. Strangelove Or How I Learned to Stop Worrying and Love The Bomb (1964)

Son of Rambow: An Early Review