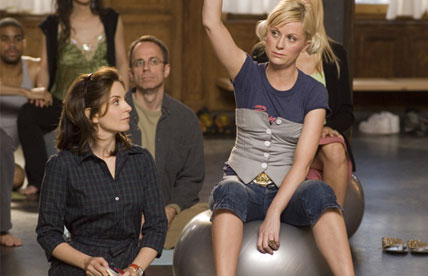 The movie is directed by Michael McCullers and stars Tina Fey as Kate, a successful business woman who has seen most of her thirties pass her by without many relationships, and with no prospects of children. She decides to look into artificial insemination, only to find she has a “T shaped” uterus, and can not bare children. In desperation for a child, she locates an agency which finds a serogate mother (Amy Poehler) to carry the baby for her.

Enter Angie (Poehler), a trailer trash, no common sense, backwards talking slob who breaks up with her boyfriend shortly after being impregnated with Kate’s fertilized egg. Angie moves in and immediately throws Kate’s world into upheaval. She is found urinating in the sink, because she can’t operate a simple childproof lock on the toilet..haha..only not. She eats junk food, smokes and drinks red bull. She opens Kate’s niece’s birthday present (an american idol sing along game) and spends the day playing it, and generally violates every rule of decency and common sense.

The movies simple premise is dragged out untolerably long to exploit every possible juvienile joke it can in the 90 minute time-frame. The film obviously drags due to a lack of content, and like a female Beavis and Butthead, Baby Mama also employs every cheap bodily function joke it can think of, and never manages a single moment of sincere comedy or a hint of something greater going on behind the unfunny antics of Angie and workaholic Kate. The problem I have with these movies, like 95% of all the SNL star driven films, is that they aren’t good concepts for full feature films. There not, at all. Maybe…maybe it would work as a skit on SNL, but not for an extended amount of time. Also its a pregnancy comedy on the heels of both Knocked Up and Juno, both of which were a million times better, funnier, and more heartfelt than this film.

A highly disappointing, and often offensively bad film, and one that wastes the talents of Tina Fey, and does much to turn the audience off from Amy Poehler, who isn’t among the stronger performers on SNL each week anyways. Why this film got made is beyond me. A horribly unredeeming comedy. One that I wouldn’t recommend to anyone.