Forget Agent Myers. This time around, it’s all about the freaks. With Hellboy II: The Golden Army, visual genius Guillermo Del Toro has crafted a veritable feast for the senses. The film sports a fistful of vivid action set pieces, a dozen or more monstrous creatures, and memorable moments by the barrel. It’s bursting at the seams with brilliant characters, each of them developed far beyond what was offered in 2004’s Hellboy.

Hellboy (Ron Perlman) is back, called to action after an exiled elf prince named Nuada (Luke Goss) vows to reignite a centuries-old conflict between the human and the mythical worlds using the fabled Golden Army. Aiding Hellboy in his mission are his fellow agents at the Bureau for Paranormal Research and Defense: Liz Sherman (Selma Blair), pyrokinentic; Abe Sabien (Doug Jones), amphibious psychic; and Johann Krauss (Seth MacFarlane), ectoplasmic being.

Whereas Hellboy served as an introduction to the B.P.R.D. and its strange employees, its sequel forgoes the pleasantries and plunges the audience immediately into a weird and intriguing world. Hellboy II just has a different feel to it, a fantastic whimsy paired nicely with the gritty detective edge of its characters. The fairy tale-esque tone of Del Toro’s Pan’s Labyrinth is apparent and welcome.

As mentioned, Rupert Evans does not reprise his role as John Myers. And though Evans did a bang-up job as the befuddled F.B.I. transfer in the first film, Hellboy II focuses on what’s important: the outcasts. Liz’s and Abe’s characters are greatly expanded, more closely resembling their roles in the Mike Mignola comics. Liz takes on a leadership role in the B.P.R.D., leaving the muscle-work to tough-talking Hellboy. And Abe doesn’t spend half of the runtime in an aquarium (and even has a love interest). The character of German mist-man Krauss is a welcome addition as well, as interesting and well-thought-out as any Mignola creation.

The film is refreshing in its special effects, utilizing animatronics and physical monster maquettes in many of its creatures. And the creatures are just fantastic – strange and unique and wonderfully grotesque. The Troll Market, one of my favorite sequences of the film, is bustling with all manner of oddities, like an infant that proclaims “I’m not a baby, I’m a tumor,” or a troll that eats stray cats.

The action is also top-notch, with plenty of swordplay, martial arts, and good, ol’ fashioned brawling. Hellboy does battle with everything from rabid tooth fairies, to evil elves, to mechanized trolls, and everything in between. It’s a flowing film, moving steadily, stopping only momentarily for the audience to stare in wonder, and wish that more filmmakers took moviemaking as seriously as Guillermo Del Toro.

With Pan’s Labyrinth under his belt and his name floating about in the mainstream, Del Toro is free here to make his film as wild, as entertaining, as creepy and as fantastically imaginative as he wants. And Hellboy II is certainly a great movie for it. As a huge fan of both Del Toro’s first film and Mignola’s comics, it warms my heart to see such a wildly imaginative blockbuster. 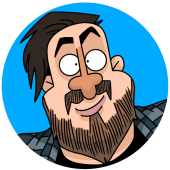 I've been writing film reviews and entertainment columns since before puberty. If I'm not partaking in the fantastic art of cinema, you will most likely find me strumming on a ukulele, writing fiction, or tabletop gaming. I am a flagrant nerd, a connoisseur of classic rock, a collector of comic books, and an appreciator of action figures. I manage a blog called Rocket Number 09, which sports entries dealing with film, gaming, entertainment, and anything else that might occur to me. It is also the home of my succesful video series, Trailer Trashing. Please check out Rocket Number 09 for more from me: http://rocketnumber09.blogspot.com

The Grey-Review (*Some Spoiler Alerts*)