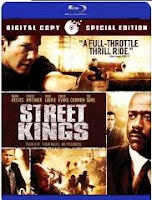 High intensity cop dramas have long been a staple of Hollywood films, most of them set out to show that police officers are here to protect us (which most are); but, lately it seems that these types of films have shifted somewhat in their approach to cops. No longer are all police officers in the movies out to protect and serve the communities, now it seems that most movie cops are out only for themselves and a bigger piece of financial pie which they will take any way they can get it. A few years ago, one highly praised film focused on these morally challenged police officers with such explosiveness and realism that audiences couldn’t help but notice this changing trend in Hollywood’s police dramas. The film I’m referring to would be director Antoine Fuqua’s incredibly intense and suspenseful, critically acclaimed movie “Training Day”. Fast forward a little more to the present day, and we have ourselves yet another glimpse at the darker side of some police officers, in a film that at times feels like a semi-sequel to “Training Day”, the fast-paced, action-packed “Street Kings” starring Keanu Reeves and Forest Whitaker. Coincidentally, “Street Kings” is directed by David Ayer (“Harsh Times”), who wrote the screenplay to “Training Day”, which may explain the nagging sense of familiarity that this movie has to his earlier work.

“Street Kings” is the story of L.A. police detective Tom Ludlow (go figure a police drama set in L.A., say it isn’t so), whose career as a cop is one riddled with compromise and violence. As a member of a team of detectives overseen by Capt. Jack Wander (Forest Whitaker), Tom (Keanu Reeves) leads the other members in breaking disturbing cases, especially those with a higher profile that could find its way somehow onto the evening news. However, catching a break in some of these cases doesn’t always come without a price, and as Tom is finding out sometimes that price is much too high to pay.

With the success of “Training Day”, for which Denzel Washington won his first Best Actor Oscar, and the acclaim garnered from TV’s “The Shield”, movie studios are quickly catching on to the fact that audiences seem unable to get enough of these morally questionable characters that can often be viewed as anti-heroes. I personally thought “Training Day” was a very well made film and one deserving of any accolades it received, as was Denzel Washington in the lead role. The same can be said for “The Shield”, which just so happens to be one of my favorite shows on television; however, as good as both of these examples are, their successes can be viewed as testaments to how morally compromising our culture is becoming. The mere fact that we tolerate, and at times even root for, these anti-heroes that in another, simpler time would have been viewed as villains, says to me that the time for true heroes may be coming to an end, and it is a sad commentary on we as a people. Well, that’s enough of that kind of talk; it’s time to move onto the task at hand, sharing my thoughts on the recently released “Street Kings”.

The story for “Street Kings” is a melting pot of twists and turns, violence, excessive language, and corruption as far as the eye can see. Written by Kurt Wimmer (“Equilibrium”) and first-time screenwriter Jamie Moss, based on a story by James Ellroy (“L.A. Confidential”), “Street Kings” instantly hits the ground running and never lets up for more than a moment or two. The writing is sharp, although far too linear for any sort of mystery to ever be achieved, and the end result is clear from early on in the film. For writers such as Kurt Wimmer and James Ellroy to work on a movie such as this, I honestly expected more than what was presented, it feels like the idea was only partially thought through, so the execution was far too by-the-book. The movie’s fast-paced momentum may be partially to blame for the predictability of the movie, with its focus apparently on the action and mayhem, all of the twists are easily seen, not a single one is all that surprising, and the story just feels like a far too simplified version of much superior work that has previously been done.

Leading the cast we have Keanu Reeves giving his usual one-note performance, although there are a few moments where he does show some emotion, but they are few and far between. Forest Whitaker appears to be in full on crazy mode here, as he seems to constantly be yelling or angry or something, he never once plays the character in a normal fashion. I’ve definitely seen better from Forest, a little less wild-eyed crazy man would have made his character a little easier to stomach, plus I was growing tired of both his character and his tirades in a hurry. Comprising the supporting cast we have Chris Evans (“Fantastic Four”), comedian Jay Mohr, Hugh Laurie (TV’s “House”), and a surprising appearance by Cedric the Entertainer (“Man of the House”). Out of the supporting cast I must say that Cedric was the biggest shocker, I had never seen him play a serious role before, but his reserved performance earns him much more respect in my eyes as an actor than I had previously given him. Aside from Keanu Reeve’s typically flat performance and Forest Whitaker’s inexplicably crazed one, the performances ranged anywhere from decent to very good, nothing exceptional but solid nonetheless.

“Street Kings” is generally entertaining in its own non-stop, extremely violent way; however, the plot is far too simplistic for it to be a standout achievement, and overall the movie comes off as an unofficial, not to mention unworthy, sequel to the vastly superior film “Training Day”.

“Street Kings” is rated R for violence, language, and sexuality.