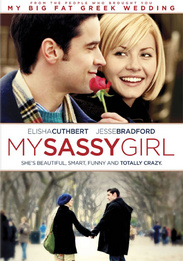 My Sassy Girl is an American remake of a Korean film of the same name, which was based off the original novel written by Ho-Sik Kim. Directed by Yann Samuel, and adapted by writer Victor Levin, the film stars Jesse Bradford as Charlie Bellow, a small town guy, from the Midwest, who has moved to New York City to attend business school, and then meets a smart, enduring, and quirky girl (Elisha Cuthbert) who challenges his life path and wins his heart.

Charlie Bellow has his whole life planned out for him, wiether he likes it or not, and nothing and noone seems able to distract him from his goals. That is until he meets sweet, quirky, and complicated Jordan on a subway platform in New York City. After rescuing Jordan from her drunken state, Charlie can’t seem to shake Jordan away, as she begins calling him frequently, and the two begin dating. Soon, Jordan has become completely emersed in Charlie’s world, winning his heart, and challenging his preconceptions about life. However, Jordan also carries a deep, personal secret, and once its revealed, it will challenge wiether or not the two young lovers can stay together.

An often predictable, often cheesy, often incredibly sappy love story, My Sassy Girl is none the less a great romantic dramedy with tremendous heart, a moving love story, and great characters. Still, even with its share of unique moments, twists, and humor, it really is mostly just like many movies of its kind that came before it, but it is still a wonderful film. I want to make that point crystal clear in the onset. Despite this, what makes it stand out is that it is told remarkably well, the choreography is near flawless, the art direction is stunning, the soundtrack is beautiful, and it features an incredibly sweet, incredibly moving chemistry between leads Jesse Bradford and Elisha Cuthbert. It is undeniably powerful watching them in this film.

As they go from strangers, to friends, to dating, and to that first spark of love, the two of them are very enduring to watch, which more than makes up for any and all of the apparent flaws and predictable nature of the romantic dramedy plotlines. It is a wonderful journey that both of these characters go thru, and each of them ends in a completly different place from where they begin, which is something that occurs so infrequently in hollywood, especially in romantic dramedies, that it should and must be acknowledged when it is done so well.

Elisha Cuthbert in particular is adorable in this movie. Her quirkiness, off beat humor and dazzling personality come across well and is very enduring. I found myself falling for her every bit as much as Charlie does in the movie. She plays every part of her character with equal effectiveness. She plays the sweet, loving girlfriend; the somewhat crazy, offbeat girl; the quirky, unpredictable, sassy girl; and she remarkably combines them into this lovable, unique girl, who at first glance would make most men run for the hills, but we, (like Charlie) all fall for her instead, and can’t look away. It is that quality that makes the movie so fun to watch. Wondering what she will do next. And wondering when and if Charlie runs away.

The film is incredibly sweet, humerous and fun. Despite some predictableness, the movie does still have a unique twist to the ending, which is beautifully set up in the screenplay. It is a feel good romantic dramedy which features an amazing young cast, great romantic moments, funny moments, and drama to go along with it. A highly recommended movie for people who love a good dramedy, and one that won’t make them feel like slashing there wrists afterward.

The 4th Wall Never Stood A Chance against Deadpool