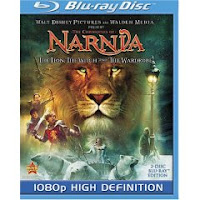 I’ve never read the literary classics that comprise C.S. Lewis’ epic “Chronicles of Narnia” series. Growing up, I know that some of the books were required reading in some of my friends’ classes, but never in my own, and then once I began to develop my own taste in books, those novels never really seemed to pique my interest all that much. When the trailers began showing up advertising the release of the first film, in what Walt Disney Pictures and Walden Media were hoping to be a hit franchise based on the novels, my initial reaction was that it looked interesting and appeared to have great special effects, but I wasn’t sure if it was the kind of movie I would enjoy. I know that the novels had previously been adapted, with a very limited budget by the BBC into low-budget movies, so I figured this new film had to at least look better than those did, but aside from Peter Jackson’s adaptation of Tolkien’s “The Lord of the Rings” novels, I really hadn’t enjoyed that many fantasy films. I personally didn’t enjoy the ‘Neverending Story’ franchise, or “Legend” starring a younger Tom Cruise, and generally speaking most movies with kids as the main characters tend to be a bit on the annoying side, so my expectations were coming in a tad on the low side. As low as my expectations were for this upcoming film, when the numerous positive reviews began pouring in, and more action and intriguing story elements were being shown in the TV spots appearing on almost every station known to man, my interest along with my expectations began increasing significantly until the movie finally arrived in theaters giving me the chance to see if all the hype was true or if I would be bored to tears, as I feared could be the case.

“The Chronicles of Narnia: The Lion, the Witch, and the Wardrobe” is the story of four siblings, Peter, Susan, Edmund, and Lucy, as they accidentally stumble across the wondrous land of Narnia, via a magical wardrobe hidden in their house. As they begin to explore this strange new world, and encounter several of its inhabitants, the children soon realize that this once-peaceful world has been plunged into what appears to be an eternal winter filled with despair courtesy of the evil White Witch (Tilda Swinton) who has proclaimed herself Queen of Narnia. The longer the children spend in Narnia the more they begin to understand that their appearance in this world was not some random incident, but in fact had been foretold in a prophecy, and that these four children, along with a powerful lion named Aslan (voiced by Liam Neeson), would lead the good creatures of Narnia in a revolt against the evil White Witch and her minions to return Narnia to its rightful state of peace and happiness.

So, after going from absolutely having no interest in seeing “The Chronicles of Narnia: The Lion, the Witch, and the Wardrobe” to being pretty much excited to see it, I was very pleased that once I watched the film I could honestly say that I loved every minute of it. The movie avoided the pitfalls that I expected it to fall victim to, for instance; having the children be too cutesy and/or annoying brats or just being unbelievable as actual kids via their moods, actions, or whatever; having an extremely boring story with the occasional action sequence to excite the audience but not much else to fill the time (i.e. “The Golden Compass”); or knowing that it was a Christian themed story, having the basic story be so cheesy and over-the-top in the delivery of the Christian allegory that it would be laughable and yet another example of a horrible attempt to make a Christian movie. Thankfully ‘Narnia’ maneuvered easily around each of these trouble spots emerging victorious as the first successful entry into what will hopefully become an entertaining franchise for audiences everywhere to enjoy.

The story, as adapted by Ann Peacock, Andrew Adamson, Christopher Marks, and Stephen McFeely, and based upon the novel by C.S. Lewis, was incredibly fast-paced and entertaining, even though the beginning had me a little worried that it was going to drag out the pre-Narnia part of the children’s lives, but even those scenes were surprisingly well-played and lively. Director Andrew Adamson (who also co-wrote the screenplay) deftly handled all of the fantasy elements and action sequences that the story required, while balancing them out with the much quieter moments as the children begin to understand their place in this new world, and the heavy burdens that accompany such an incredible destiny. I was surprised with how solid Adamson’s direction was for this movie, since his previous efforts had been the hit animated films “Shrek” and “Shrek 2” which he was a co-director on for both, so as his first solo outing ‘Narnia’ is an extremely impressive effort that he absolutely knocks out of the park from beginning to end.

The primary cast for ‘Narnia’, namely the four siblings, was comprised of relative newcomers to the world of acting, as this was the first movie for most of the kids. It’s surprising that Walt Disney Pictures and Walden Media would trust newcomers with the starring roles in a movie that could essentially launch a fantasy series that may rival New Line Cinema’s epic ‘Lord of the Rings’ trilogy, but the gamble paid off and I honestly don’t think any other actors could have done any better. Academy Award winner Tilda Swinton (“Michael Clayton”) was an ideal choice to play the evil White Witch, and she seemed to enjoy the chance to play such an evil, villainous character and made the most out of every scene she was given. Providing the voice of the majestic lion Aslan, actor Liam Neeson (“Batman Begins”), along with incredibly realistic CGI, gave the character a commanding presence with a calm soothing voice that was firm and authoritative, yet soft and caring.

I honestly could continue complimenting the various elements of the movie for several more paragraphs, but you the reader would no doubt grow weary of me and lose interest. So, I only have one more item that I feel must be recognized when reviewing this film, and of course I am referring to the outstanding CGI work produced by the special effects wizards that worked so hard behind the scenes on ‘Narnia’. Without their expertise and considerable talents, this movie would not have been nearly as impressive, and the various creatures wouldn’t have been brought to such vibrant life in a way that you almost believed that lions could speak, centaurs could walk amongst us, and that a magical world of wonder actually could exist on the other side of a wardrobe and all you have to do is be lucky enough to find it.

“The Chronicles of Narnia: The Lion, the Witch, and the Wardrobe” is an extremely entertaining thrill ride of a fantasy film comprised of brilliant special effects, excellent storytelling, and a talented cast that when mixed together delivers a movie experience that audiences can enjoy for years to come.

“The Chronicles of Narnia: The Lion, the Witch, and the Wardrobe” is rated PG for violence.