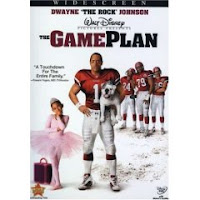 I wasn’t sure what to expect out of Disney’s newest family comedy, “The Game Plan” starring Dwayne Johnson (“The Rundown”), Kyra Sedgwick (TV’s “The Closer”), and Morris Chestnut (“Ladder 49”). For the most part, I find myself unimpressed by Disney’s various live-action family comedies, I think that Disney produces excellent drama’s safe for the whole family, but for some reason their comedies always fall short. It seems to me, that those responsible for bringing Disney’s comedies to the big screen simply don’t put forth the amount of effort needed to elevate the story above being average or below, therefore leaving me generally feeling cold to the end result. Well, with the release of “The Game Plan”, for once Disney surprised me, and actually produced a live-action family comedy that was full of genuinely funny moments, solid acting, a little bit of drama, and even some sports action mixed together to form a thoroughly entertaining movie that everyone can enjoy.

“The Game Plan” focuses on superstar quarterback Joe Kingman (Dwayne Johnson) who is preparing to lead his team through the final games of the playoffs and hopefully to the championship game. Everything is going perfectly for Joe, a self-obsessed man who cares only for himself and doesn’t even think twice to ridicule other teammates who have other concerns besides football, such as family, finances, and day-to-day life. However, that is all about to change when Joe receives an unexpected surprise in the form of an 8-year-old daughter he never even knew he had. Now, with the championship game fast approaching, Joe’s world is being turned upside down, though not in a completely bad way. In fact, what at first seemed like an inconvenience is becoming the best blessing Joe has ever received as his newly found daughter begins to open his heart to more than just himself, and allows Joe to see that there is a world outside of football, and that sometimes there are more important things to worry about than the next game.

I’m very pleased with the way “The Game Plan” broke Disney’s normal convention of family comedies, that are generally so formulaic and by-the-book, thanks to the writers, Nichole Millard and Kathryn Price (both first time feature film writers), along with director Andy Fickman (“She’s the Man”), actually attempting to include originality and genuine laughs without relying on the usual slapstick that is so cheap and, by this point in the studio’s longevity, extremely overused. Sure, the story has its moments of predictability, and you can easily see how the movie’s going to end long before you reach that point, but the journey the film takes you on contains enough surprises and little twists along the way that you don’t mind the fact that you already know the outcome. It was these surprising moments that elevated “The Game Plan” well above the majority of Disney’s live-action comedy crop, actually getting it a little bit closer to achieving the quality of their acclaimed sports-themed drama’s, such as, “Remember the Titans” or “Glory Road”. Of course, the numerous bits of football action didn’t hurt either, and I was surprised that the story approached the football scenes in a more realistic way rather than the slapstick way I had expected, which would have been to try to get in some cheap sight gags while out on the field. Even the locker room scenes, though a tad clichéd in places, weren’t filled with the ridiculousness that I had expected from Disney over the years. Clearly, those in charge of this movie knew the typical pitfalls that most of these films succumb to, and were wise enough to avoid them at all costs.

Former wrestler turned actor Dwayne Johnson (formerly known as The Rock) brings his character of Joe Kingman to ridiculously narcissistic life, imbuing him with an arrogance that is not completely off-putting due to his equal amount of charm and charisma that allows the audience to still root for him despite his shortcomings. When his daughter, played by newcomer Madison Pettis, who turns out to be a very talented young actress; Johnson handles the change in Joe’s character in a very natural way. At first he approaches this newfound responsibility with the same careless manner that he handles most matters in his personal life; however, the more time he spends with this child the softer he becomes, until he eventually develops a deeply genuine love for his daughter, along with a willingness to do whatever it takes to remain in her life, even if it costs him the big game or jeopardizes his future successes on and off the field. Kyra Sedgwick is perfect as Joe’s scheming agent who desperately wants an endorsement deal with a fast-food chain that she knows is worthless, and will stop at nothing in her efforts to push this newest obstacle in the form of Joe’s new daughter out of the way before any more damage is done to his career, at least from her perspective. Leading the rest of the supporting cast, which consisted mostly of Joe’s football team, is actor Morris Chestnut who represents the only man on the team who appears to have a family and children to call his own. He is the brunt of most of Joe’s jokes early on in the film, but eventually becomes a close friend and adviser to Joe in all things child related. Lastly, actress Roselyn Sanchez (“The Boat Trip”) shows up about halfway through the movie as a ballet instructor that teaches the class Joe’s daughter attends, she brings a hint of romance to the proceedings and serves as the eventual love interest for Joe as she helps his daughter reach the father trapped inside this self-absorbed jock’s body.

“The Game Plan” is in no way the perfect film, it’s as predictable as most family or romantic comedies tend to be, but the story contains enough surprises throughout that I didn’t even mind knowing exactly how the movie was going to end before it really ever began. Featuring solid acting, genuine laughs, a heartwarming story, and even some football action, when mixed together these elements make “The Game Plan” a winner of a family comedy in my book.

“The Game Plan” is rated PG.

The Girl in the Cafe