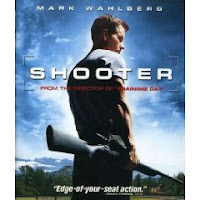 Sometimes I wonder why I wait so long before watching a certain movie, especially one that has received praise from essentially everyone I know that has ever seen it. Such is the case with the military-themed/conspiracy thriller “Shooter” starring Mark Wahlberg (“Four Brothers”) and Danny Glover (‘Lethal Weapon’ series). I was told from so many sources that “Shooter” is a definite must-see of a movie, yet for some unknown reason I never did get around to watching it, until recently that is. Of course, I had plenty of opportunities to watch the movie, due to the fact that I had purchased it several months back even though I hadn’t seen it yet (a concept which may seem strange to some of you). Who knows why it took me so long, maybe I need to get my head examined (one of my friends sure thought so when I told him I had yet to see this movie). Whatever the case may be, when all was said and done now that I’ve finally taken an opportunity to sit down and watch the movie, I enjoyed every single minute of it and wished I would have gotten around to seeing it much sooner.

“Shooter” is the story of former Marine sniper Bob Lee Swagger (Mark Wahlberg), who after being betrayed by his superiors, has left the service and is leading a quiet, peaceful existence in a remote cabin somewhere in the mountains. However, as much as Bob Lee has tried to remove himself from the outside world, there are those that still possess the means to find him; led by a high ranking Colonel (Danny Glover), a mysterious group within the U.S. government believes that Bob Lee may be the one person on the planet to help them in preventing an impending assassination attempt on the current President of the United States. Feeling the pressure to once again serve his country, Bob Lee reluctantly agrees to lend his expertise; however, all is not as it seems. On the day of the attempt, Bob Lee is betrayed and wrongfully identified as the shooter by the very people he agreed to help. Now, he’s on the run from virtually every government agency in the United States, and as if that weren’t enough to contend with, the group that hired him is tracking him across the country to silence the one loose end that could expose their far-reaching conspiracy to the entire nation.

I’ve got to say that I am becoming more and more impressed by Mark Wahlberg’s acting ability with each movie he makes. Not only are his skills as an actor becoming more refined, but his movies just seem to get better and better as well. Mark’s performance as Bob Lee Swagger was perfect, he was full of confidence without being arrogant, appeared to be an honorable man who seemed to go out of his way to save lives at all cost, and despite being betrayed by his superiors, he still maintained a strong sense of pride for his country and the military; which was a welcome change in character traits from most of the leading roles featured in today’s movies dealing with any facet of the military and/or its soldiers. Michael Pena (“World Trade Center”) was solid in his portrayal of an FBI agent that becomes Bob’s reluctant partner, and one of the few members of any government agency that believes that he may just be innocent after all, despite all the evidence to the contrary. Kate Mara (“We Are Marshall”) plays a widow of one of Bob’s military buddies from his time in the service, and becomes an ally and eventual love interest for him, serving as a means for allowing Bob to open up once more to another human being and to begin to heal from the wounds that his life and career have left upon him. Kate wasn’t given as much to do in this film dramatically as she had been in “We Are Marshall”, but what time she did have on the screen she made the best of, and managed to show that her character was emotionally vulnerable, yet strong enough to stand up for herself if the moment arose; instead of just being the typical damsel in distress that would generally be the female role in a film such as this. Granted she eventually becomes ‘in distress’ so to speak, but not until she’s proven to the audience that she has the means with which to protect herself under normal circumstances. Rounding out the cast are veteran actors Danny Glover and Ned Beatty as members of a secret group within the U.S. government that sets Bob up for the assassination attempt. Danny Glover has played villains a few times throughout his rather lengthy career, and each time he brings a depth and realism to each character, never allowing them to be even remotely the same in their presentation. For his character in “Shooter”, Danny added a slight lisp to his character’s vocal performance, and played him as someone who had at one time possibly been an honorable soldier, but life and/or experiences have jaded him so much that he is essentially nothing more than a soldier for hire to the highest bidder. Portraying the man currently financing Glover’s most recent mission is Ned Beatty, in a surprisingly sinister turn as a corrupt U.S. Senator who feels he has the nation’s best interests at heart, no matter how misguided he may be, and is willing to do anything to see his goals accomplished.

Critically acclaimed director Antoine Fuqua (“Training Day”) delivers movie audiences yet another solid film following up his previous successes, the historical epic “King Arthur”, the military thriller “Tears of the Sun”, and the film that garnered Denzel Washington his first Best Actor Oscar nod “Training Day”. Fuqua deftly captures the frantic action and fast-paced action sequences with the ease of an accomplished action director, utilizing quick edits that have become synonymous with today’s action films; yet Fuqua thankfully avoids overusing the hand-held camera approach that has permeated most of the popular action movies of recent years (a technique that was made popular by director Paul Greengrass’ massive box office success with “The Bourne Supremacy”). For a director whose early successes were found in music videos, Antoine Fuqua has definitely come a long way in the last ten years since he made his theatrical directorial debut with “The Replacement Killers”, and has become yet another one of those directors whose films I greatly anticipate whenever I hear of an impending release, though I don’t always rush out to see them as was the case here.

The plot for “Shooter” was surprisingly more involved and complex than one would expect from most Hollywood action films. The screenplay, written by Jonathan Lemkin (“Lethal Weapon 4”) and based on a novel by Stephen Hunter titled “Point of Impact”, featured plenty of little twists and turns along the way to keep the suspense ratcheted up, and the audience wondering just what exactly was going to happen next. I really appreciated how the script spent time focusing on each of the main characters to flesh them out a bit more than your standard one-dimensional action film characters generally would be; it was this type of work in a screenplay that propelled “Shooter” far above the average action movie that most action buffs love to see. Truthfully, “Shooter” could almost be considered a “thinking man’s action film” so to speak. Who knows, with the success of “Shooter” maybe Hollywood will take notice and begin making more action films with this kind of attention to detail, featuring smart, well-written dialogue, surprising twists (that make sense and don’t appear convoluted and convenient), and plenty of suspense and thrills without resorting to excessive violence as their only means of conveyance. If we begin to see this kind of action movie taking place more and more, maybe the action genre could gain a little bit more respect from the critics; instead, of being looked upon as films for the mindless masses that can’t stand to see any kind of drama being played out, only guns blazing, fists flying, and mayhem galore, maybe there’s hope in the eyes of critics for the action junkies yet.

Every single aspect of “Shooter” was perfectly mixed together, from the acting to the directing to the story; nothing was out of place or off-beat in the least; delivering audiences an incredibly solid action film that boasted plenty of pulse-pounding action, along with a hefty dose of drama, intrigue, and depth to make for a thoroughly entertaining movie experience.

“Shooter” is rated R for violence and language.