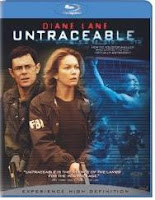 During the last decade or so, Hollywood has embraced a new trend of horror films that seems to have the sole purpose of simply raising the bar for gory content, and aside from a few exceptions, these movies seem to lack significantly in the story department (the exceptions would be the first two entries in the seemingly unending ‘Saw’ series). In an attempt to comment on the apparent decay of modern moviegoers’ standards, due to their eager embracing of the so-called “torture porn” trend, director Gregory Hoblit (“Fracture”) delivers to audiences a thriller with a very serious, yet hypocritical message with the new film “Untraceable” starring Diane Lane and Colin Hanks.

“Untraceable” follows FBI Special Agent Jennifer Marsh (Diane Lane) and her partner Griffin Dowd (Colin Hanks) as they work the lesser known cyber-crime division within the bureau. Their job is to patrol the internet, searching for any kind of criminal activity that may be occurring online. These two agents have seen virtually anything depraved members of society could imagine; at least that’s what they thought until they encountered a new site devoted to the senseless killings of innocent victims. This new site displays the graphic murders of its victims via live streaming video, and the speed at which the victim is murdered is directly linked to the number of hits the website receives. So, the more people who log-on to this killer’s site, the faster he dispatches his punishment. Now, Marsh and her partner must do what they do best to track down a killer that is as skilled as they are in all things tech-related, while trying to stop a curious and twisted public from logging on for the next kill.

“Untraceable” is, for the most part, a relatively solid thriller, although it’s not nearly deserving of the praise showcased on the DVD case that boasted the film to be in a similar class to the Jonathan Demme classic “The Silence of the Lambs”. You may have noticed earlier that I used the word “hypocritical” in reference to “Untraceable” and its message, and you may be curious as to what I meant by that, since director Gregory Hoblit’s message contained in this film was one of condemnation towards movie audience’s apparent proclivity towards this newer, gorier breed of horror films. Well, this movie is completely hypocritical in that the story condemns “torture porn”, yet the grisly murder sequences featured throughout appear to embrace it. Granted, the numerous death scenes, though graphic, are not nearly as gory and twisted as those featured in the various ‘Saw’ films and other similar themed movies that have been released since that series began. Still, the film’s message feels lost when viewed from the perspective that in order for the film to succeed the audience must be willing to sit through the very thing that’s being preached against; so I guess that little fact must have been lost on not only the director, but also his first time screenwriters, Robert Fyvolent and Mark R. Brinker. I kind of expect new writers to miss the obvious hypocrisy inherent in their script, but I would have thought that an experienced director such as Gregory Hoblit would have caught on and made some attempt to reduce some of the more grisly sequences, perhaps opting for a more Hitchkockian approach where less is more or something along those lines, but I guess I was wrong.

The story for “Untraceable” is well-written, again for the most part, essentially 85% of the film is a well-crafted thriller (even with the contradicting goals the film has), easily keeping the attention of the audience without letting up one iota on the suspense. However, near the end of the movie, right before the inevitable showdown, the film hits a major snag. Up until this pivotal scene, Diane Lane’s character had been a fast-thinker, always quick on her feet, and appearing almost one step ahead of the villain; yet, to get her character into position for the final conflict with the killer, the writers made her character act foolishly, obviously not thinking rationally about the consequences of her actions, and made this audience member wonder what the heck the writers were thinking here. Yet again, I would have thought that such an obviously ridiculous plot point would have been noticed and corrected by the director of all people, but once more I was let down and the scene remained intact in all of its ludicrous glory. Prior to that disappointing lapse in capable writing and judgment, the film had been an above average thriller, but after that point the film’s focus shifted from that of a thriller into being just another horror film with a more developed villain than most.

The cast for “Untraceable” is without a doubt the brightest spot in this otherwise dark and at times twisted movie. Diane Lane (“Unfaithful”) is excellent as Special Agent Jennifer Marsh, portraying her as a very realistic character through not only her performance, but also in her appearance. It was nice to see a movie that focuses on an agent of the FBI, specifically a female agent, without dressing her up in some sexed-up attire that no normal member of the bureau would ever wear for the job. It was that realism that I really appreciated from this movie, and for me, made her character so easy to identify with because she was so normal, and seemed as if she could be anyone anywhere. Colin Hanks (“King Kong”) was a terrific choice as her partner Griffin Dowd, he exuded a natural charm and wit that he obviously must have inherited from his talented father Tom Hanks, and his little bits of humor that his character injected into the movie were welcome respites from the otherwise tension-filled story. Lesser known actors Billy Burke (“Fracture”) and Joseph Cross (“Jack Frost”) rounded out the primary cast, both delivering solid performances, although Burke’s detective character was a little one-dimensional and clichéd, although he did the best he could with what he had to work with. Joseph Cross was a surprise to me by how much he had matured as an actor, the last time I had seen him was in a small guest role on TV’s “Smallville” and in the family film “Jack Frost” several years before that, both were good performances, but nothing near the level of talent he displayed here.

“Untraceable” is a fairly entertaining thriller, with plenty of twists to keep the audience on its toes; however, an ill-conceived, and poorly executed plot point in the latter half of the film causes the movie to lose its footing and devolve into typical horror movie territory. The movie is worth watching at least once, even with the obviously hypocritical nature of the film’s message, but definitely not much more beyond that.

“Untraceable” is rated R for violence, language, and grisly images.

The Birth of a Nation