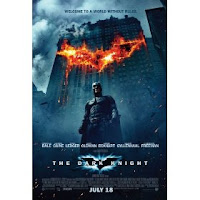 Three years ago, director Christopher Nolan (“The Prestige”) successfully resurrected the ‘Batman’ franchise after its unfortunate demise at the hands of Joel Schumacher (“Batman Forever” & “Batman & Robin”). Nolan’s vision for Gotham City’s dark hero was grounded in a more realistic world than the previous four movies had been, gone was the camp and unnecessary nipples on the batsuit from Schumacher’s version, and in was an authentic, true to the comic book interpretation of the brooding hero, complete with darker villains, much more realistic weapons and gadgets, and some of the best acting and storytelling of any of the Bat’s incarnations this side of its comic book origins. After “Batman Begins” sustained a solid run at the box office and on DVD, fans eagerly awaited to see just what this new franchise would do with the story that was setup in the final moments of ‘Begins’ when Lt. Gordon showed Batman the Joker card. Now, here we are in 2008, and the anxiously anticipated sequel has been released and let me tell you “The Dark Knight” definitely delivers, successfully building upon the outstanding groundwork that had been laid by “Batman Begins” and going beyond my own, and many others, expectations to create an awesome experience at the movies.

“The Dark Knight” picks up sometime after the events depicted in the previous film, as Batman (Christian Bale) is continuing his crusade to take back Gotham City from the evil, corrupt men that have held sway over it for so long. Assisting Batman in his fight for justice are his trusted allies Lt. James Gordon (Gary Oldman), his former love and Assistant D.A. Rachel Dawes (Maggie Gyllenhall), his butler Alfred (Michael Caine), his tech supplier Lucius Fox (Morgan Freeman), and a newly appointed District Attorney named Harvey Dent (Aaron Eckhart). With as much help and support as Batman is getting in his quest, it would seem that victory over the forces of darkness may actually be possible; however, a new evil is emerging in the form of the maniacal Joker (Heath Ledger). A twisted man with the simplest of intentions, to plunge Gotham City into complete and utter chaos, and God be with anyone that gets in his way. As this new threat tests the limits of not only Batman, but the very citizens of Gotham City, it seems that perhaps evil may finally have the last laugh.

Wow. “The Dark Knight” is one of the best comic book inspired movies ever put in front of a camera; in fact calling it a comic book movie is almost inaccurate as this movie has more in common with a crime thriller than your standard comic book film. Sure, the movie features characters that are somewhat larger than life, and the main character dresses himself up in a batsuit; but the storytelling is done in such a realistic fashion that it allows the movie to transcend the barriers that typically surround the traditional comic book movie. Gaining respect and acclaim from critics all throughout Hollywood, a new concept for most comic book inspired creations, “The Dark Knight” may possibly be the first of its kind to be viewed more as a respected mainstream action/drama than just another comic book movie.

The screenplay for “The Dark Knight” as crafted by director Christopher Nolan and his brother Jonathan, based on a story by Christopher and David S. Goyer (writer of the ‘Blade’ franchise), is an excellent follow-up to the terrific work this team of talented individuals had done with “Batman Begins”. The story is so full of intensity, twists and turns, and a hefty dose of the unexpected, that you really need to see the movie more than once in order to fully appreciate all of the various elements that comprise this entertaining slice of pop culture. The story for “Batman Begins” was focused primarily on the origin of Batman and his initial appearances in Gotham City, with “The Dark Knight” the story focuses much more on the escalation of evil around the city that has been inadvertently caused by Batman’s continuing quest for justice. This shift in focus allows the movie to become much darker than the previous one, and more of a character study as each of the characters, primarily the hero, are forced to take a good look at themselves and what his or her actions may be having on the increased problems plaguing the city, and whether their contributions are worth the price or not.

The talented cast assembled for this movie is such an incredible ensemble of Hollywood’s A-list that it’s amazing the story was capable of giving the appropriate amount of attention to them all without some getting lost in the shuffle. Christian Bale delivers what is easily the best portrayal of the duality of Bruce Wayne/Batman, expertly playing the opposing nature the character has with his playboy lifestyle as Bruce Wayne, compared to the intensity and violence that consumes his life as the Batman. Matching wits with Batman this time around is the maniacal Joker, played to cackling perfection by the late Heath Ledger (“A Knight’s Tale”). Heath’s performance as the Joker is by far the definitive version of the character outside of the comic books, making all others that have played him pale in comparison. From every facial tick, to the trademark laugh, to his odd pattern of speech, everything about this character is spot on; and Heath has masterfully created one of the most iconic villainous performances in modern cinema, that it may even rival Anthony Hopkin’s chilling creation of Hannibal Lecter in “The Silence of the Lambs”. Supporting the two lead actors, if you can truly call them that, as the story gives equal time to almost every one of the primary characters, are returning cast members Gary Oldman, who gets to do so much more with Jim Gordon than he was able to in “Batman Begins”, Michael Caine (“Secondhand Lions”) as trusted butler Alfred, who provides the unwavering support that Batman needs in his continuing war on crime, and Morgan Freeman returning as Lucius Fox, the man that provides all the necessary technology that Batman needs to take back the streets of Gotham City. Joining the series for the first time is actor Aaron Eckhart (“No Reservations”) as Harvey Dent, a man who has a thirst for justice almost as intense as Batman’s, although his methods are more by the book than the Bat’s; and actress Maggie Gyllenhall (“World Trade Center”) replacing Katie Holmes as Rachel Dawes, a former love of Bruce Wayne’s and assistant D.A. to Harvey Dent. This time Rachel is given much more screen time, and a more fleshed out story than she previously had in “Batman Begins”, which is probably a testament to Maggie Gyllenhall being a somewhat better actress than Katie Holmes, not to mention she doesn’t come with the baggage that is Tom Cruise.

“The Dark Knight” is, as I said earlier, one of the best comic book adaptations, if not the best (in my opinion), and may also be viewed as more of a crime thriller than a comic book movie. Comprised of intense storytelling (much more so than any of its predecessors), excellent acting, white knuckle action sequences, and numerous twists, turns, and surprises that will leave you begging for more as the credits begin to roll.

“The Dark Knight” is rated PG-13 for violence and brief language.