The X-Files: I Want to Believe 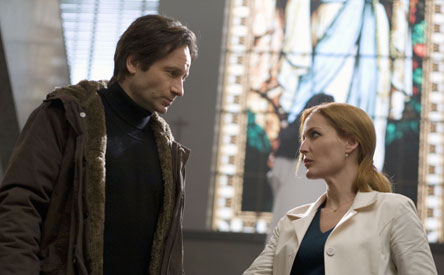 The popular television show finally returns on the big screen for its second full-length feature, the first since 1998. Series creator, writer and producer Chris Carter handles all those jobs, as well as Director of the new tale featuring now ex-FBI Agents Fox Mulder (David Duchovny) and Dana Scully (Gillian Anderson), brought in by the FBI to help lend insight to a new “X-file” type of case.

An FBI agent goes missing, and an ex-priest and ex-pediaphile, Father Joseph (Billy Connolly), seems to be the only person with any information. The problem is that he appears to have no direct connection with the case or victim and claims his knowledge is via psychic images from God. After Joseph leads them to a severed arm, but no body and no other leads, Agent Dakota Whitney (Amanda Peet) sends her partner, Agent Mosley Drummy (Alvin “Xzibit” Joiner), to approach Scully at her job in a catholic hospital, where she is searching for answers to cure a young boy (Marco Niccoli) who has a terminable brain disease. Drummy asks Scully to locate Mulder, who has been on the run, and in hiding since the conclusion of the X-Files T.V. show in 2002. Scully confronts Mulder with the particulars of the case, and the FBI’s promise to drop all charges against him in return for his help. Mulder agrees, but only on the condition that Scully help him on the case.

Any fan of the cult-hit T.V. show will no doubt be curious to see there favorite agents on the big screen (or any screen) for the first time in six years, and will no doubt be curious to hear whats been going on since the dismal series finale that saw Mulder flee into exile and Scully alone and out of the FBI. Some back story, some details and some room to catch up with our two heroes. Any fan (myself included) expecting that will be disappointed. The film opens like any other episode of the show, with the familar type font on the bottom of the screen telling us when and where we are as we see the horrifying images of the FBI agent being assaulted mixed with Father Joseph leading a squad of agents across a frozen lake in search for her. After only finding a severed arm, the film cuts to Scully, fighting for answers to cure a patient when she is confronted by Drummy and sent off to find Mulder. We immediately cut to a run-down shack in the middle of nowhere, and a bearded Mulder cuts out newspaper clippings of bizzare news stories and litters his walls with them. We see familiar images of Mulder’s sister’s picture, his tray of sunflower seeds and his iconic “I want to believe” poster featuring a blurry flying saucer over a tree-line. Yet, after a brief discussion, both our agents are back on the case with little time spent on playing catch up for the audience.

Instead, Chris Carter chooses to rush things along and get Mulder and Scully deep into the case as little tidbits of information are given in one of the many small quiet moments in the film. The films title, I Want to Believe, is of course an homage to Mulder’s poster and a statement that can be associated with his character, as the many years on the X-Files and in exile after them haven’t faultered his belief in the unknown or the fantastic. The title also, quite poignantly, can be associated with Scully, who wants to believe in Mulder, but who is also having a deep crisis of faith in the daily dealings of her new job as a doctor in a catholic run hospital. The Father Joseph character affects both heroes in different ways; for Mulder its a way back into his old life and a way to continue his search for proof that the unexplained is explainable, thus helping him maybe come to terms with his sisters abduction and death; for Scully, he represents her faith and all that can be wrong with it and proof that God works in unflattering ways sometimes.

After setting up the tone of the story and the hurried reintroductions out of the way, the second half of the film becomes dreary, moody, confused (even to fans), painfully slow, and has the same problems the more recent Star Trek films have had, and thats that it seems much too episodic, too much like the new weekly episode of the show. Only not as good as half of them. New viewers, not familiar with the show at all, will most likely be bored and confused when it comes to the character moments, whereas the fans will just be disappointed that Carter didn’t do more. I mean seriously now…Fans waited for this? THIS?!? Fox and Carter seem to have aimed low and produced as simple a thriller and simple an excuse for returning these beloved characters to the screen as possible. But where are the X-file-y stuff?? Nowhere in the film is there aliens, monsters, black oil or government conspiracies. Instead, the film has a bewilderingly depressing and unspectacular plotline that takes its sweet time in solving. Nothing more than the characters and theme music directly ties this film to the beloved series at all, other than showing where they’ve gone since.  The only two continuing main storylines discussed at length is Mulder’s obsession with his sister’s abduction and the troubled, on and off romance between the two former partners.

When presenting an audience with a big screen story, you’re somewhat promising them that the story you’re about to tell them is worth $10 and the time to see it, and that it was also worth you putting it on the silver screen, as opposed to just T.V. Unfortunately, I Want to Believe is nothing more than  just a less than mediocre two-part episode of the show. As even just a run-of-the-mill thriller, the movie isn’t terribly good and not all that suspensefull at all. The character moments are good, but too few and too rushed for the sake of the “episode” plotline. Another cast member does make a nice cameo for the final ten minutes or so, which was fun to see, but by that time the film has become nothing but a dismal disappointment. And like the previous film and the ending of the T.V. show, the film closes with more questions than answers, but does seem to try and set-up the possibility that the characters could return. Mostly (again, as a fan), I wish Carter would’ve just left well enough alone.