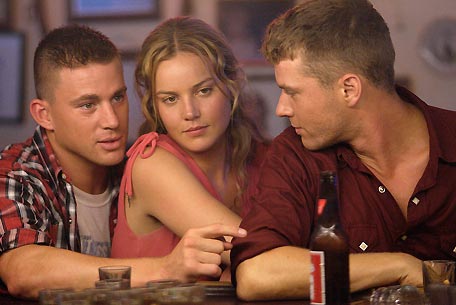 Director Kimberly Peirce and MTV productions tell the story of a decorated American soldier (Ryan Phillippe) who returns after completing his tour in Iraq only to find out he’s being immorally “stop-lossed” by the President and the Army and being forcefully shipped back to Iraq.

After witnessing the horrors of war and surviving a tour in Iraq, boyhood friends Brandon King (Phillippe) and Steve Shriver (Channing Tatum) return home to Texas, along with others from there unit on leave, including mind-warped Tommy (Joseph Gordon-Levitt). An emotional return home turns into a nightmare, however, when Brandon is told he is being “stop-lossed” by the President and the Army, and forcefully shipped back to Iraq. When Brandon refuses to go, screaming to anyone who will listen that it is wrong and immoral, his commanding officer (Timothy Olyphant) tries to have him put in the stockade until his unit reships out. Brandon flees, and wants to make an attempt to appeal his case before a Texas senator (Josef Sommer) in Washington, D.C. Steve is having problems readjusting to civilian life, and is considering rejoining and enlisting in sniper school. His alienated fiancee, Michelle (Abbie Cornish) agrees to help Brandon get to D.C. and friction arises between the three life-long friends, as they each fight for what they believe in and decide what best to do.

The opening scenes of Stop-Loss will remind you of Black Hawk Down. The high emphasis on the emotionally warped soldier returning home from war will no doubt conjure images of every Vietnam war movie you’ve ever seen, and the scenes of Texas collegiates drinking and swearing will remind you of Varsity Blues, another MTV produced film. Director Peirce has obviously seen all of those movies, especially the Vietnam ones and tries to use every trick in the book in her movie about soldiers fighting an injust war and being treated unfairly by a dictator-like President in Washington. Honestly, if the opening scenes didn’t take place in Iraq and it wasn’t mentioned constantly, you’d forget it was a movie about the modern Iraq war and think you were watching another Vietnam flick.

Thats not always a bad thing,  however, and when the blatant attempts to make the audience feel bitter, angry and empowered towards the war work, they do work very well and effectively. Much of the time though, the movie comes off as childish and unoriginal. Phillippe does a respectable job in the lead role and commands attention on the screen, but he is also surrounded by inempt actors, obviosuly hired by MTV for there looks or TV star status, rather than there acting abilities. It’s appatent the hope was to bring in the younger generation of movie-goers with the eye candy on screen and just enough skin in the previews to bring them in and spoonfeed the subject matter to them. But aside from Phillippe, they all seem like just that, eyecandy. Cornish, for example, seems constantly outmatched and outacted by Phillippe, whom she spends most of her onscreen time with, and it really hurts her character. Tatum mostly comes off as a pretty-boy, brooding under his macho physique for no apparent reason other than he wants to shoot more stuff. Gordon-Levitt at times plays Tommy well, but mostly only envokes images from  The Deer Hunter and Christopher Walkin’s performance in a similar character, which would be a good thing, except that Levitt is no Walkin and this movie is no Deer Hunter.

Other things that bothered me was the frequent use of abnoxiously annoying hip-hop music behind battle scenes or flashbacks. I know MTV had a hand in this thing, but couldn’t we hire a composer? It was very distracting, and I eventually started muting the TV each time one of those scenes began. I know what the movie was trying to accomplish, and I more or less assume that many such “Iraq is the new Vietnam” movies will continue to be made by a new generation of filmmakers trying to do what a generation of filmmakers did in the 1970s and 1980s during and after that war. However, while similarities exist between them, writers and directors should stop emposing there opinions and comparisons on the rest of us. A great war movie, or movie about the effects of war, will appear senseless, yet speak to people in different ways. Director Peirce leaves no wiggle room in her war movie. It’s her way or the highway. You either agree with everything or not. Either way, the ending seems to take a left turn out of nowhere and seems like a gutless bait and switch by the filmmakers, who campaign towards one set of ideals for most of the two hours and suddenly veer to another for the final five minutes.