Firstly, am I the only that constantly confuses Steven oderbergh with David Cronenberg? (At least I can spell their names properly) And secondly, the only Soderbergh films that I have seen previously are the Ocean’s films, Traffic, and The Good German (which I didn’t care for). I can see now that I definitely need to explore more of his earlier work. It’s not all George Clooney and heists.

I randomly picked up Bubble at the library a few days, thinking it was from the director of Eastern Promises and A History of Violence. With that in mind, I really wasn’t expecting the style of the film. About 20 minutes into it, I had to check the director on IMDb.

It’s quite an unusual film, more in the style of the Dogme 95 movement than anything else. I learned afterwards that the three main actors hadn’t acted before and the scrpt was improvised. This definitely makes sense, and I thought that it worked out very well. Everything about the film felt real and not forced. I was especially impressed with the subtelty.

There’s an alternate ending on the DVD, which personally I didn’t care for. I’m very glad that they didn’t use it, as it completely ruins the realistic quality of Bubble. I vastly prefer the ending that I did see. Everything isn’t wrapped up in a nice narrative box. There’s a lot to think about in terms of the characters and their motivations, and especially varying degrees of conflict. And of course, toss a little religion into the mix.

Bubble could almost be qualified as a short film, clocking in at 73 minutes. For me the length was perfect. With a film like this that doesn’t rely havily on professional actors and a developed script, I’m not sure how it would have fared with another half hour or so. The story was concise and intriguing.

I’m not going to summarize the film. I’d rather just recommend that you get a copy and watch it. 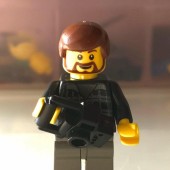