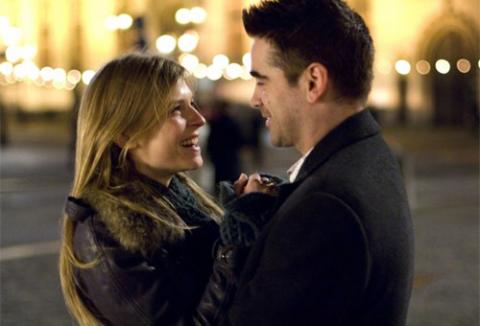 A dark comedy written and directed by Martin McDonagh, In Bruges stars Colin Farrell and Brendan Gleeson as two hit men who are sent to lay low in Bruges, Belgium after a botched assasination job for there boss, Harry (Ralph Fiennes).

After accidently killing a child, Ray (Farrell) and his partner Ken (Gleeson) are sent to the medieval city of Bruges to lay low while the heat wears down and there boss, Harry can figure out what to do with them. Ray, wracked with guilt over what he’s done, is immediately turned off by Bruges and complains about being stuck there, while Ken quickly discovers all the hidden tourist treasures in the ancient city. The two men not only differ on Bruges itself, but religion, death and the meaning behind the great mysteries of life as they spend time together.

While Ken continues to find fascination with the ancient city, Ray continues to be bored, that is until he meets Chloe (Clemence Posey), a free-spirited woman who, along with her ex-boyfriend hustles tourists for there money. Ray convinces Chloe to go out to dinner with him and along the way his temper gets the best of him, as he gets into a few sorted adventures, most of which center around a dwarf. Meanwhile, Harry calls Ken and asks him to quietly kill Ray, a punishment for his killing the child, and Ken must wrestle within himself to discover wiether or not he can bring himself to kill his friend and partner.

Something I found interesting (and ironic) within the movie, is that Ray is constantly comparing Bruges to purgatory, a place of neverending torment and torture. I found this interesting because that’s exactly what it feels like to watch this movie, which obviously takes place In Bruges. The movie starts dull, ends dull and reaches new points of boredom and dullness inbetween. Not helping is the sleep inducing musical score, and very bleak locales in the movie. While, at times, shot majestically by McDonaugh, they mostly only help to make the viewer, like the characters, feel trapped in this boring city. Now, I realize (and appreciate to a degree) that this is probably a point that someone who enjoyed the film could easily make for liking it. I, however, did not like the film at all, and so enhancing the feeling of entrapment only made things worse. I felt often like the movie had no purpose, no ending in sight and no idea how to resolve itself.

For starters, the plot and characters are dreadfully predictable and unlikable. Even the side characters are unlikable, especially the dwarf, who is a racist bastard hopped up on horse tranquilizers, screaming about the inevitable battle to come between the whites and minorities. Most movies of this sort will at least endow the female lead with some sort of sweetness or innocence to play off the dark hearted anti-heroes like Ray and Ken. Not this film. No sir. Chloe, while insanely attractive and sexy, is almost as bad as the two hitmen, praying on tourists and selling drugs in a city that apparently has no crime enforcement. To be fair, small attempts are made to give some of the characters redeemable qualities, or at least redeemable ideals, but just because an otherwise dispicable character says things like “You can’t kill kids,” doesn’t make them any more likable. It just means they have common sense.

Every plot “twist” can be seen miles ahead of time, so much infact that it becomes frustrating how much behind the movie can get to where you have already guessed it would go. Mainly the problem with In Bruges is that it is essentially one set of poorly written, unlikable characters running into and pissing off other poorly written and unlikable characters, until eventually most of them are dead or dying at the end of the movie. Never before have I even considered so heavily to giving a movie the unheard of “Zero stars,” but I came very close in this one. Basically the presence of the lovely Clemence Posey is worth a “1/2 star” rating on its own, otherwise the movie is utter rubbish.