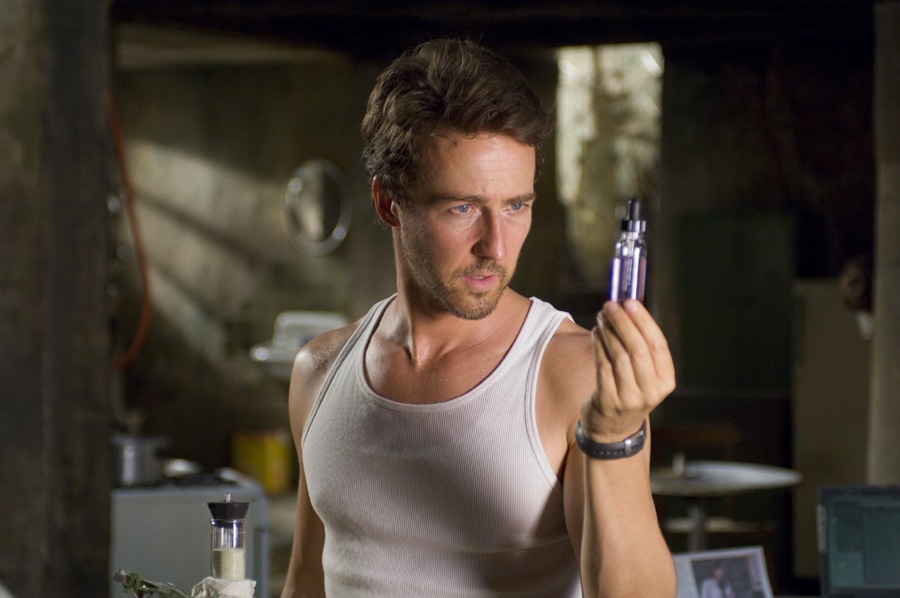 After the atrocity that was Ang Lee’s Hulk it was almost impossible to sink lower with this newer adaptation. People were a bit concerned at first when they heard that the Hulk movie was being given another shot but when it was announced that Edward Norton was on board as the big green fighting machine everyone’s concern seemed to begin dying down. This installment confuses me a bit, not with the movie itself but on where it stands as far as connection to Ang Lee’s version. It seems to have no correlation at all but then again we do seem do drop right into the movie and it looks similar to where Ang Lee’s version left off. Apart from that though I am going to treat this film as if it had no connection what so ever.

The film starts us off with Bruce Banner, who is played by Edward Norton of course, attempting to live his life in hiding. He is working in a factory, trying to control his anger and emotions through meditation and yoga classes, and also seems to be talking with a strange man named Dr. Blue who is helping Bruce search for a possible cure to his condition. It’s a strange point to start us off from but it serves it’s purpose well. The movie starts picking up when the General of the Army tracks Bruce down and sends in a team, led by Tim Roth, to capture him. He views Bruce’s entire body as property of the United States government. Well, the team arrives and tries to sneak attack Bruce but it doesn’t work at all in their favor  We finally catch our first glimpse of the hulk and the movie progresses as he runs away and tries to keep himself as far away from the General as he can. Along the way he runs into his old girlfriend played by Liv Tyler and she tries to help him out along the way. Bruce is in love with Tyler’s character and she seems to be the only one who can subdue him while he’s in Hulk Form.

The visual effects work fine here where they are needed and the fights scenes are welcome indeed but what truly makes the movie for me are the great performances given by Liv Tyler and especially Edward Norton. There’s no question that he was the absolute perfect choice for this role and he gives us an incredible Hulk. The villain played by Tim Roth also checks in a strong performance which makes the film a real tight package as far as casting is concerned. Everyone plays their parts extremely well and I found myself really involved in the performances.

While the performances are extremely solid I still found something off with this movie. With it being just over two hours long the movie feels a bit slow and oddly paced. While the action scenes are great it feels like there are too few and strangely enough it felt as if the movie kept repeating itself in a way. Hulk fights army and Tim Roth gets angry. Hulk fights the army and a stronger Tim Roth. Hulk fights army and a much stronger and angrier Tim Roth. And finally Hulk fights a pissed off Abomination Tim Roth who is now fighting the Army. It’s all very formulaic and while it works well a part of me wishes that there had been more variety in it all.

MY TOP ELEVEN MOVIES OF THE YEAR (YES ELEVEN, I THOUGHT I WOULD SPICE IT UP A LITTLE)