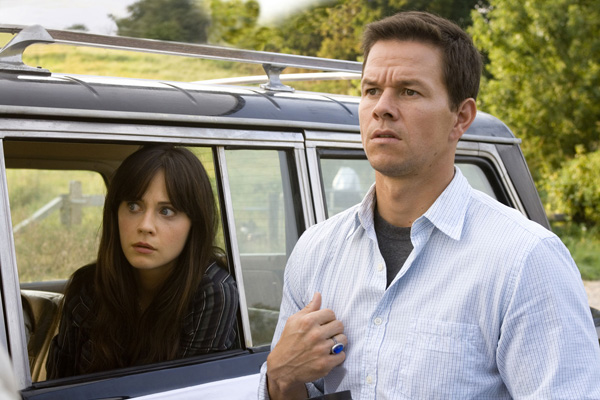 The sixth film by writer/director M. Night Shyamalan is undeniably different than his previous five films. For starters, it is the first film that has recieved a ‘R’ rating, and it’s also (surprisingly) a film without any attempt for his trademark twist ending. There’s no attempt to fool you or to pull something from behind an invisible curtain. In his previous films, Shyamalan had a gift for setting things up and layering the events of the movie in such a way that we were surprised by the ending. Everything was important and so every scene was crucial. That is not the case in his latest paranoid thriller, The Happening, which explains the great mystery of what’s going on very early in the film, and the movie suffers greatly as a result.

The film focuses on a high school science teacher, Elliot Moore (Mark Wahlberg), and his estrainged wife, Alma (Zooey Deschanel) as they try to protect a young girl (Ashlyn Sanchez) while on the run from a mysterious natural threat to humanity. An event starts in Central Park where people suddenly become disoriented and lose motor functions and then finally feel compelled to kill themselves in any variety of horrible ways. Theories spread about what could be causing it, the first theory being that it’s a chemical attack by terrorists. A panic ensues and in Philadelphia, Elliot and Alma join Julian (John Leguizamo) and his daughter, Jess (Sanchez) on the first available train out of the city. Shortly later, reports come in that Boston and Philadelphia have both been hit by the same threat and then the conductor of the train loses contact with the outside world and stops the train in a small Pennsylvania town, leaving Elliot, Alma and the rest of the passengers to fend for themselves. Julian leaves Jess with Elliot and Alma as he hitches a ride to go search for his wife, and the three of them go on the run as they try to figure out whats going on and how to survive it.

The Happening is a truely bizzare film. It is very reminescent of the 1950’s apocalyptic paranoid thriller’s about the end of the world or alien invaders. Most noticably, the writing doesn’t seem as polished as in his previous films. I know I am in the minority, but I enjoyed Lady in the Water and think Shyamalan took a step backwards with this film. Litterally about 1/3 of the way into the movie you’re told what’s going on, that it has something to do with the wind and another thing I won’t divulge here. So, from that point on we’re not as scared, both because of what it is and because the mystery is gone. The movie relies on scare moments and the acting of the main characters, which is extremely wierd and hard to watch at times. Mark Wahlberg plays his role with two basic expressions, worrying and thinking about worrying and does both with the same basic intense look on his face. It’s painful to see a great actor reduced to playing an unconvincing teacher with the emotional range of a wet sack.

Perhaps the moment where I started to lose faith in the film is where Elliot and Alma are walking along in a field with other survivors and Alma confesses having gone on a date with another guy she met at work. Firstly, she does it so mousey and so mumbly that it just seems wierd and ungenuine. Then Mark Wahlberg’s reaction is basically to breathe heavily for a moment and cheesily say “You lied to me?” and then continue walking without another word. I’m sorry, but especially under the stressful situation they’re in, any guy would’ve screamed at his wife at that point, or had some reaction. They both just seem so unbelievable in the movie. Don’t get me wrong, both Wahlberg and Deschanel are amazing actors on any other day, but both played there parts in this movie very cardboard like. Maybe that’s what Shyamalan wanted, maybe it was on purpose and it was for some unknown reason that escaped me, but I didn’t like it. Deschanel’s role is attempted to be explained away as her having trouble expressing herself and her emotions to others, but that doesn’t help her performance any. She has the biggest and among the most beautiful blue eyes in hollywood, but they spend most of the movie in an prolonged hightened sense of terror, often for no reason.

Then there’s the needless attempt for a ‘R’ rated horror film, probably just to advertise the movie as Shymalan’s first. Take out a few gory scenes and the film is essentially ‘PG’. However, the horror scenes are quite graphic, sometimes needlessly so and I often found myself missing the more subtle horror in his previous ‘PG-13’ films, which to me was much more terrifying because we were allowed the ability to see what we wanted and essentially scared ourselves. Here it is just all there for us to see. Blood and gore and all. The scenes depicting humans killing themselves in all sorts of different methods are quite disturbing and horrible, as they should be, but the looming big picture threat wasn’t pulled off as well, and often came off as just silly nonsense. Also, the threat occurs so early in the film, that the main characters are essentially on the run the entire film and that gets old after awhile. There’s nothing worse than a 90 minute film with 45 minutes of worthwhile storytelling to accomplish.

Threat and acting aside, I do like where the movie ended up, and the messages it got across. Besides the obvious one, which will be apparent when you see the movie, I quite liked another scene near the end of the movie, which was the only honest and well written scene in my opinion. Elliot and Alma are in seperate rooms talking to one another thru a pipe in the ground as the looming threat is outside. They start talking about there first date and how Elliot bought her a mood ring, and they begin recalling what each color meant when they looked it up. Finally Alma asks Elliot if he remembers which color stood for love, and he answers very honestly and tenderly, “I don’t remember.”  It echoes beautifully the estraingement between husband and wife and the distance that has grown between them. That scene has layers to it, and its probably only 2 minutes long and was a great subtle message within the overall message of the movie. It’s a shame that Shymalan appears to have been more focused on shock value with the death scenes and not on writing the usually well written and character driven films we’ve become usued to seeing in the past.