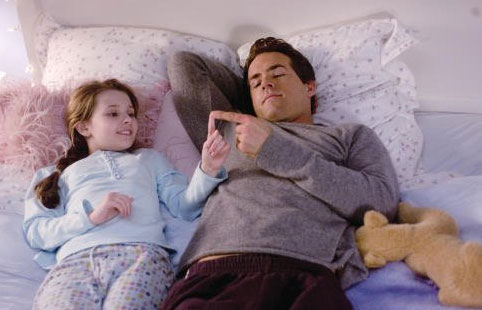 Ryan Reynolds stars as a political consultant who attempts to explain his impending divorce to his young daughter in this romantic dramedy written and directed by Adam Brooks.

Will Hayes (Reynolds) has seen his share of disappointments in his life. Both personally and in his career, but now comes the biggest disappointment yet, his impending divorce. His 11 year old daughter, Maya (Abigail Breslin), inquires about her mother and how Will met her and convinces him to tell her the story. Will agrees, but adds a twist, he will tell her a much larger story of the only 3 serious girlfriends he ever had, changing the names of the girls and some of the facts, and its up to Maya to figure out which girl became her mother. A “love mystery”, as Maya proclaims. Will begins to recount his past, and we learn about not just the 3 girls, but where his life has gone from ambitous collegiate to rundown political analyst. We see the choices Will made along the way that got him to this point.

The 3 girls are all very different from another. First is the college sweetheart, Emily (Elizabeth Banks), who stays behind in rural Wisconsin while Will moves to New York to help out on the Bill Clinton presidential campaign in 1992. While working on the campaign, Will meets April (Isla Fischer), a perky and independent minded copy-girl in the Clinton headquarters. Later, Will delivers a package from Emily to Summer (Rachel Weisz), a college student who wants to be a reporter. The three stories revolve around one another nicely, as the girls each enter and leave Will’s life. Each girl also compliments what Will is going thru in each specific time he is either involved with or has a crush on each of them. As he grows up, and the relationships fail along with his ambitions, Will becomes a different person. It’s a story anyone over the age of 25 can very much relate to, as we all know what its like going from 18 and suddenly becoming 25-26-27 years old. Rarely are we the same people, and the movie does a nice job of showing that journey with the Will character, as well as the 3 girls.

It’s also a very insightful film, showing the knowledge that comes after time when looking back at failed relationships. We never see it clearly while it’s happening, but anyone who has looked back with an Ex over a drink or lunch, will certainly understand and relate to the overall theme of the movie. As the story unfolds, we also become invested in the girls, and surely each audience member will choose which one they hope to see Will with in the end. That’s where the film has an unexpected twist. It doesn’t end how you’d expect it to end, at least I didn’t expect it. We almost forget, as we see the dramedy of Will’s relationships unfold before our eyes, that whomever he ends up with in the end, is also the same girl who is now divorcing him, and we can also overlook the fact that for Maya, the whole story is bittersweet. Yes, she’s finally learning how her parents got together, but she also knows that they’re divorcing one another.

The performances are very good from the 3 girls, as well as Breslin and Reynolds, who have a nice chemistry as cool dad and daughter. Breslin in particular does a good job of portraying the confusion an 11 year old must be feeling while her parents are seperating, but also a knowledge that her parents deserve happiness despite the seperation. Reynolds does a fine job as the leading man, but I could easily see why some people wouldn’t like him in this movie. It’s like Jim Carrey, some people liked him in more dramatic roles and some people hated it. What makes it work for me is his natural charm and his ability to convey such dry, sarcastic witty humor, and then balance that with genuinely dramatic moments in the script. He also has proven over the years that he apparently has great chemistry with every woman in Hollywood, and that trend continues in this film. Without giving away who he ends up with in the end, and who the mother is, let me just say that looking back at the film, its obvious who it’ll be just by the fantastic chemistry between Reynolds and this character. The scenes they share are by far the best in the movie, and among the funniest.

All that said, it is not an outstanding film, but it is a very good one. The film does move along at a deliberately slow pace, but overall I’d say the movie is adorably cute, and has its heart in the right place, and there’s something to say for a cute romantic comedy that doesn’t try to be anything more than it is.