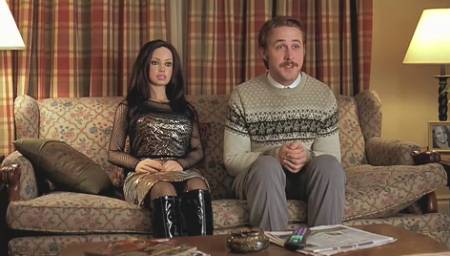 Lars and the Real Girl is an off-beat comedy about a delusional young man who falls for a sex doll he ordered over the internet. The film was written by Nancy Oliver (Six-Feet Under), and directed by Craig Gillespie (Mr. Woodcock). The film is 1 hour and 46 minutes in length.

Lars Lindstrom (Ryan Gosling, The Notebook) leads a simple life and keeps to himself. Oblivious to him is also the fact that the entire community he lives in adores him. Despite this, he spends his time alone, politely avoiding even the simpliest of social gatherings, such as breakfast or dinner. He lives in the garage house adjacent to his childhood home, while his older brother, Gus (Paul Schneider, Elizabethtown), and his wife, Karin (Emily Mortimer, The Pink Panther), live in the house itself. Karin becomes seriously concerned about Lars and attempts to get him to open up, but older brother Gus doesn’t see anything wrong with Lars and ignores what’s going on. At work, a new co-worker, Margo (Kelli Garner, Normal Adolescent Behavior), has her sights set on Lars as well, and the pressures from both home and work finally get to Lars. Quietly, Lars orders a (anatomically correct) sex doll from the internet, who he names Bianca, and introduces her to his brother and sister-in-law as his real, true-life girlfriend. Caught off guard, the two decide to take him in to see a doctor (Patricia Clarkson, No Reservations) in hopes of determining wiether or not Lars has infact truely gone insane.

After the doctor suggests going along with Lars dellusion that Bianca is real, Gus and Karin inform the rest of the community, who all surprisingly rally to help however they can. Lars creates an ellaborate backstory for Bianca, one remarkably similar to his own childhood, which causes Gus to feel guilty about leaving Lars with there anti-social father, after there mother died giving birth to Lars. As the days and weeks pass, the fictional relationship with Bianca intensifies as Lars finally begins to open up and experiences emotions he has never had before. Before long, Lars finds that Bianca is involved in all parts of the community from the schools to the hospital, as this small town does what it can to help Lars thru his dellusions. In doing so, the community and Lars only fall for Bianca harder and it becomes harder for them to accept that, eventually, Lars will let Bianca go.

The idea of the film is (admittedly) laughable, at best, but Gosling portrays Lars with such charm and with such restrained emotion that you totally buy into his love for Bianca, who looks like Adrianna Lima with Angelina Jolie’s lips and breasts. What makes the film work so well, is how it could’ve gone and didn’t. It could easily have been an outrageous and offensive comedy, rattling off sex joke after sex joke, instead Gillespie focuses on the drama of Lars and what is going on in his head. Bianca, we eventually figure out, isn’t a doll at all, but an extension of Lars and his insecurities. She is his way of working thru his issues and of asking for help, even if it is indirectly. Bianca serves to allow Lars the time and ability to move past his own inner-demons, his own self-doubts and catch a glimpse of what it means to be intimate with another human being. Gosling’s tender performance as Lars, and the depth of longing in his eyes, is what will hook you into this film. By the end of the film we find we’re kind of attached to Bianca as well, and we don’t want to see her go.

The supporting cast is also quite good in the film, especially Kelli Garner’s Margo, who has a subtle and nerdy cuteness to her and who has great chemistry with Gosling. You can feel her longing as she consistently puts herself out there and asks Lars out time and time again. In some ways, she is as insecure as Lars, and that helps her to better realize what he is going thru than others do. Perhaps my favorite scene in the film is after a co-worker has tied a noose around one of Margo’s teddy bear’s neck, and she runs to the breakroom crying. Lars, beginning to open up to people at this point, quietly unties the noose and performs CPR on the teddy bear to help cheer Margo up. Its a heartwarming and adorable scene between the two characters, and an example of the level of humanity in the script.

Remarkably touching, humerous at times and without a doubt one of the most original films released in many years. Lars and the Real Girl is a heartwarming film about a small community rallying to help one of there own, and also the journey of one man to understand both himself and his relationship to others. It’s also a thoughtful movie, and doesn’t speed things along or try to shove things down your throught, it allows you the time to get to know these people and this community. Don’t let the plot of the film (or the title) scare you away, as it is nothing like you’re expecting it to be. Trust me on that one.